I began to lose control… 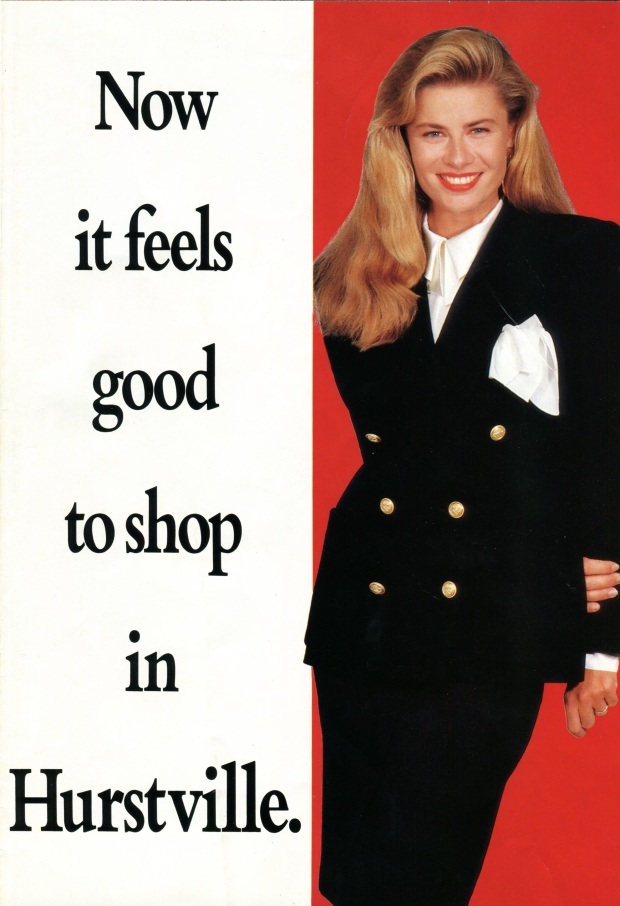 What, you mean it didn’t before?

By 1988, the decade-old Westfield Shoppingtown at Hurstville was outgrowing its baby clothes. The centre had been crafted as the perfect milkshake to bring the boys to Hurstville’s yard, but it had worked too well. The public’s insatiable hunger for more shops, more variety, more ways to waste their money had grown, while the centre itself had remained essentially the same.

What had met the “international standard” just ten years earlier no longer cut the mustard in the decade of decadence. Of course, this standard was set by Westfield itself, which had opened six centres in the USA since 1980 in its quest to become an international presence. Oh but don’t worry all you xenophobes, they’re still as dinky-di true-blue fair-dinkum mate as a dead dingo’s donger:

Despite suffering heavy losses in the 1987 stock market crash – bad enough to force the sale of star asset Network Ten (!) in 1989 – the Westfield Group was keen to apply what it had learned in the international market to its legacy outlets.

And let’s face facts: they don’t get much more legacy than Hurstville.

I say we nuke the site from orbit.

Dated 1987, Westfield’s plan for aggressive expansion looks very bold on paper. The centre’s extension was to take up an entire block neighbouring the existing site, a proposal that no doubt delighted Hurstville Council. I know what you’re saying, “It’s lucky they had a spare block of land bereft of residents on hand in order to allow Westfield to expand!”

When we thought we were moving closer to the shops, this wasn’t what we had in mind.

Just left of the complex in that picture are houses, trees, all that good stuff. But as the caption says, FULL STEAM AHEAD. 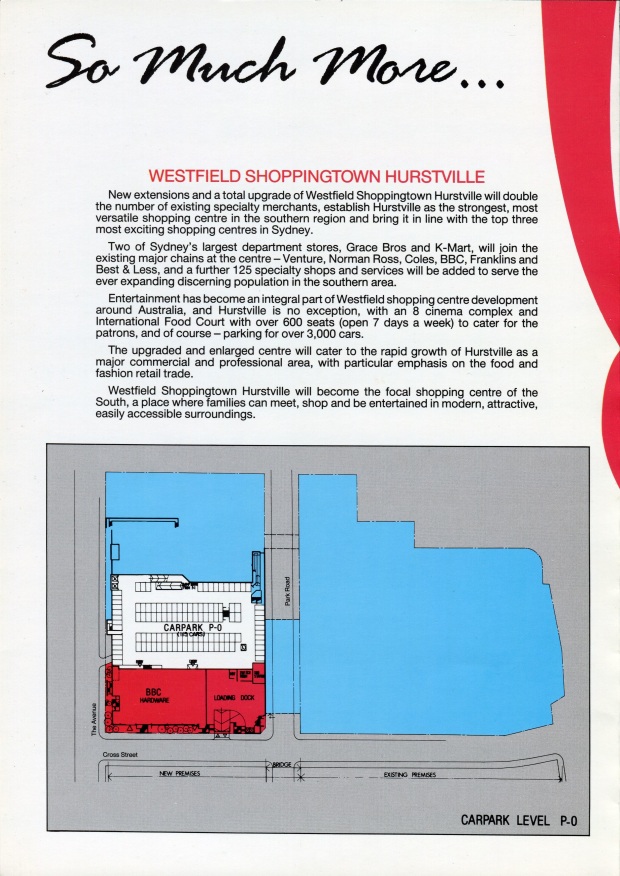 Come on, those houses had parking for three cars at best. 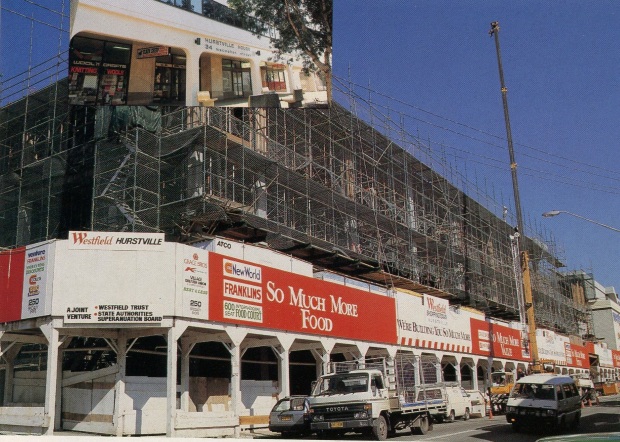 For so fewer people.

Back in their original 1975 proposal, Westfield had been very careful to minimise the impact the centre would have on the community, all in the service of buttering up the Hurstville Council. The pinnacle of this effort was the Snowy Hill Park atop the centre, a nature reserve where people could come and relax away from the hustle and bustle of the retail juggernaut below. In 1988, it was the first to go, razed to make way for a carpark. It says a lot about how the balance of power in the suburb had changed in ten years that this was able to happen. As it stands, this blog entry is now the most public memorial to Snowy. Ouch.

All this talk of growth was all well and good, but what exactly was growing? Sure, Westfield’s profits were hulking out, and Hurstville Council’s take-home wouldn’t have been anything to sneeze at, but was Hurstville itself doing much growing? Let’s see… 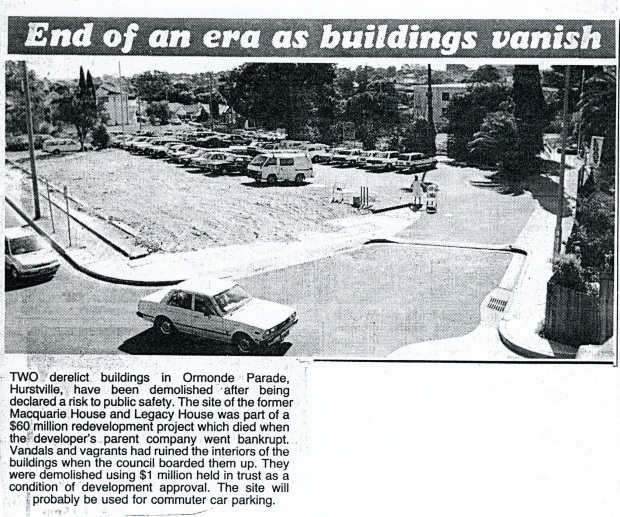 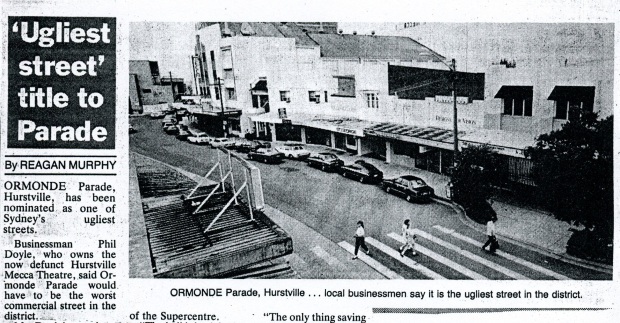 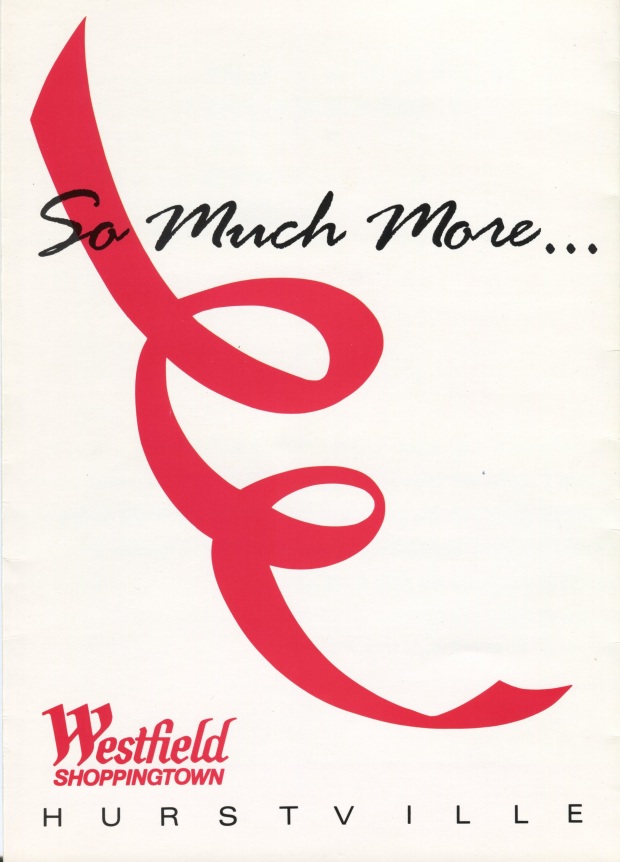 1990. It was time. The grand opening everyone had been foaming at the mouth for, that people had sacrificed their homes for – that Snowy Hill had been swept under the rug for – was at hand. Did Westfield spare any expense bringing out the big guns for such an occasion?

Isn’t he that guy from The Zone?

The biggest jewel in Westfield’s new crown was the addition of Sydney department store mainstay Grace Bros. With Waltons, Westfield had backed the wrong horse, and were determined to make sure that didn’t happen again. The new Grace Bros. also served to steal even more of the floundering Roselands’ thunder, as GB had been that centre’s pride and joy for years at this point. Also new to Hurstville were K-Mart, 125 new specialty shops, as well as some of the biggest and most resilient names in retail: 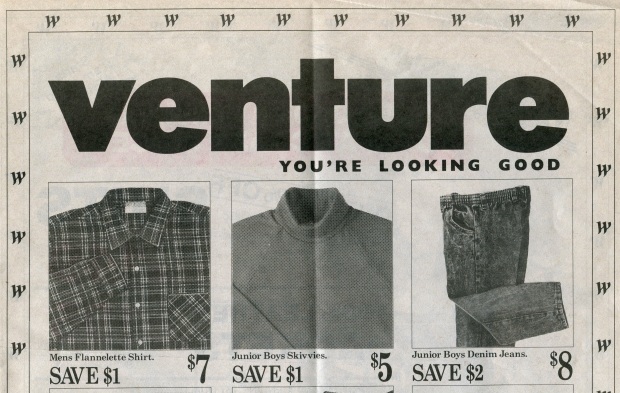 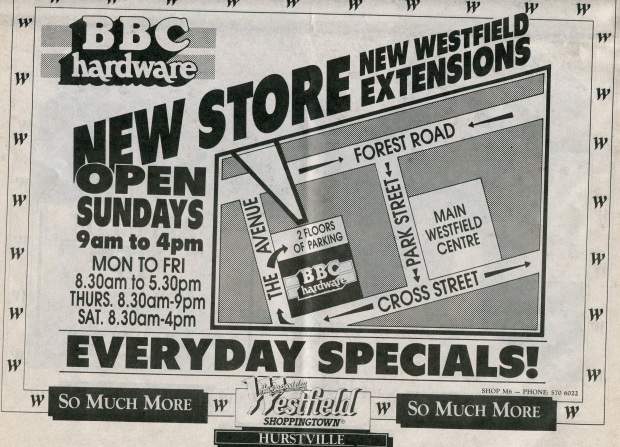 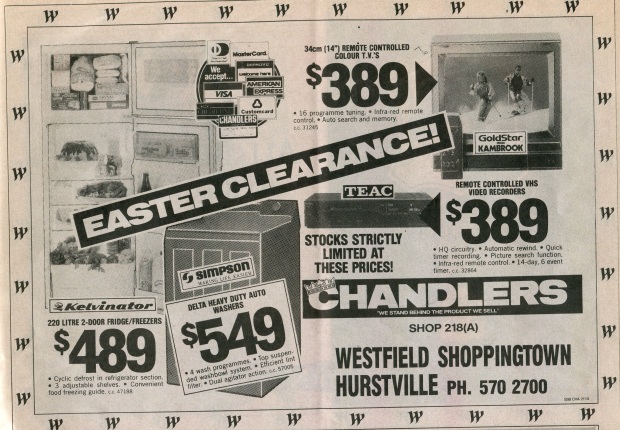 Take a moment to catch your breath and let’s take a look at the whole lineup:

My award for the best business name ever goes to the hairdresser known as BOSS HAIR TEAM. Untouchable.

Armed with all these new shops and bearing the International Standard ™, Westfield was primed to take the new decade by storm, and for a time it worked. High profile acquisitions and additions peppered the 1990s, but none as exciting as when dying god Venture made way for American toy giant Toys R Us in 1993.

As my contemporaries would concur, the concept of a two storey toy shop was mind-blowing at the time. Compare this to the mere one storey of Bankstown’s World 4 Kids (itself a countermeasure against Toys R Us) and there’s just no competition. Never mind that the bottom level was mainly baby stuff and outdoor junk, that’s not the point. TWO STOREYS.

Whoever rated Another 48HRS as a ‘top’ film should be shot.

On the entertainment front, Westfield had topped off its retail sundae with the cherry that was Greater Union. An eight-screen cinema (considered huge at the time, believe me), GU blew away local competition like the Hurstville Savoy, the Kogarah Mecca and the Beverly Hills Cinema. How could those small fry hope to compete with eight screens?

For me though, the high point of Westfield’s desire to innovate during the 1990s was Intencity. Pre-empted by a cool, mysterious ad campaign (below), it seemed as if Intencity was the natural evolution of video game arcades of the past such as Spacetacular and Fun & Games….but that’s another story.

But all the glitz and dazzle was blinding Hurstvillians from what was really going on in the area. For every Toys R Us, there was a story like this. For every K-Mart, there was one of these. And for every Grace Bros., there was a Barter’s.

Remember Barter’s (see part one if you don’t)? Living proof that bigger isn’t always better, the three-storey Barter’s had begun its slow decline with the advent of the Westfield itself back in the late ’70s. In January 1985, Barter’s held its last ever sale, and everything had to go:

Scabs from all over Hurstville picked the place clean. What had once been the example of retail elegance in Hurstville was now…well:

Should have had such a sale every day. Barter’s Fire Sale, January 1985. Image courtesy Hurstville Council

They were even giving the Norms away. Barter’s on the slab, July 1985. Image courtesy Hurstville Council

The oft-ignored side effect of the Westfield was the damage it caused to the Forest Road shopping strip. Although it had originally been intended to complement those shops, Westfield had done everything so much bigger and better that the little guys outside didn’t stand a chance. Throughout the ’90s and ’00s, stories like this were common: 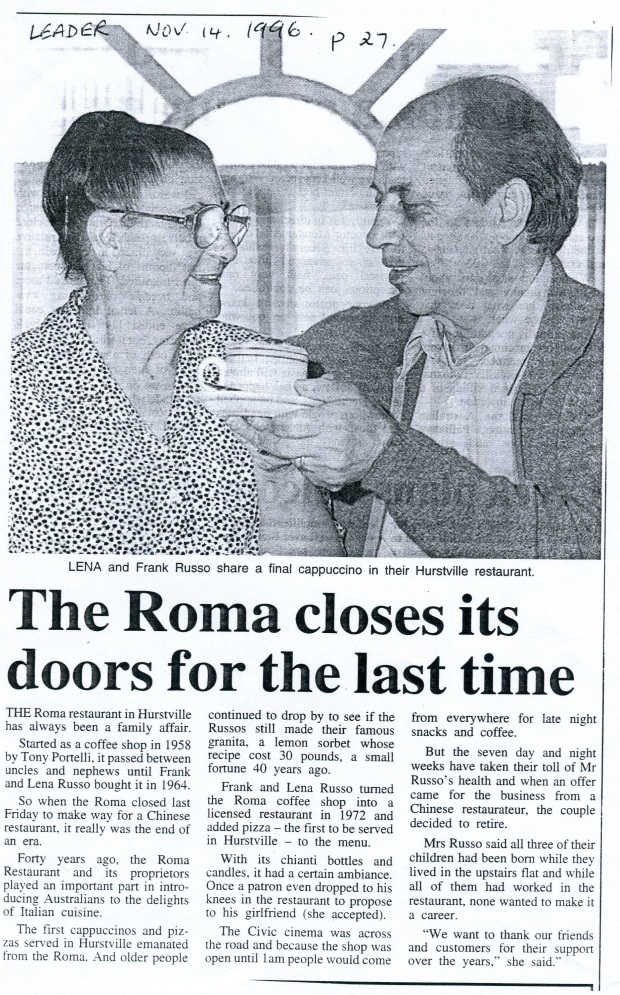 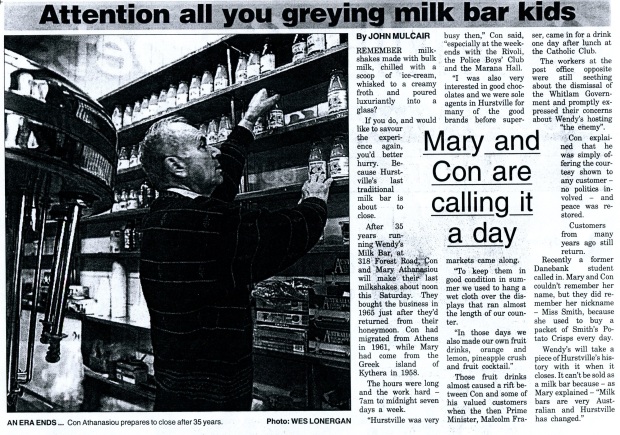 Not helping matters for local retailers was the debacle that was Forest Road Mall. Proposed in 1988 by council and intended to celebrate Hurstville becoming a city that year, the plan would have seen the two-way Forest Road closed off to private traffic and transformed into a pedestrian mall, ‘Hurstville Boulevard’. It was believed that this mall would combat Westfield’s dominance of the area, although how council thought they could do this and not appear two-faced is beyond me. Needless to say, it wasn’t very popular with retailers: 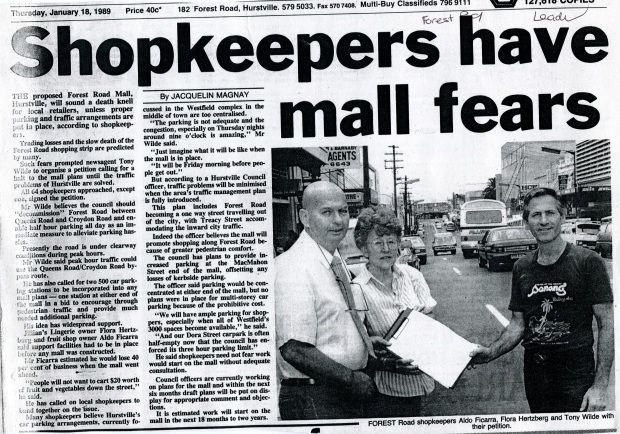 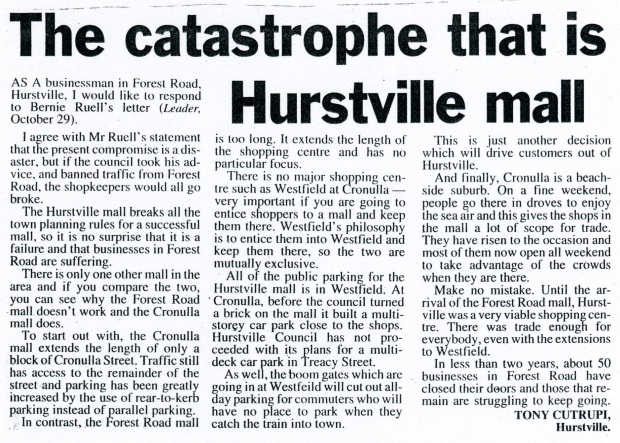 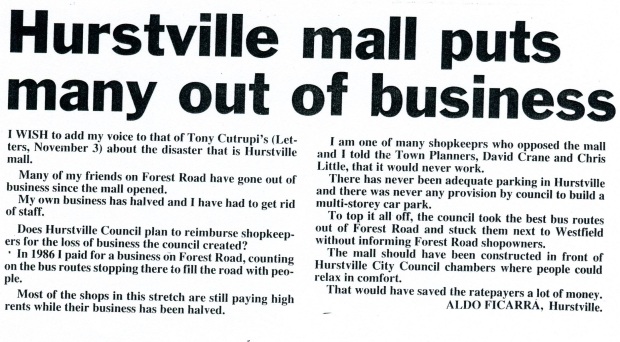 It may shock you to learn that Hurstville Council went ahead with this plan in 1991, going so far as to hold an opening celebration…

…that featured perhaps one of the least appropriate double-billings in entertainment history: 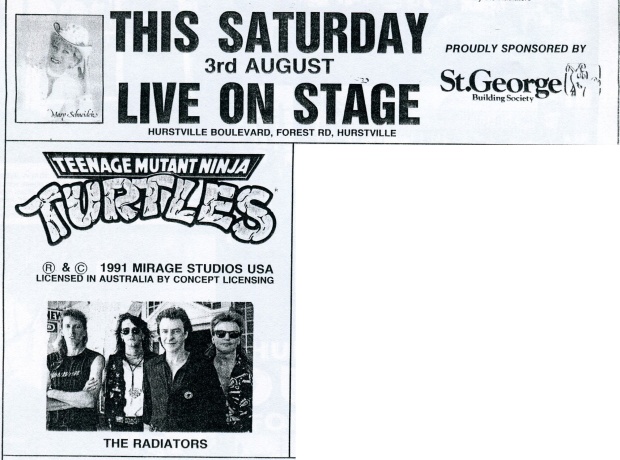 The madness ended in late 1991, as the recession, coupled with increasingly fierce opposition, caused council to rethink their plans. As so much of the construction work to turn Forest Road into the car-free Hurstville Boulevard had been completed, a compromise was met: Forest Road became a one-way street. 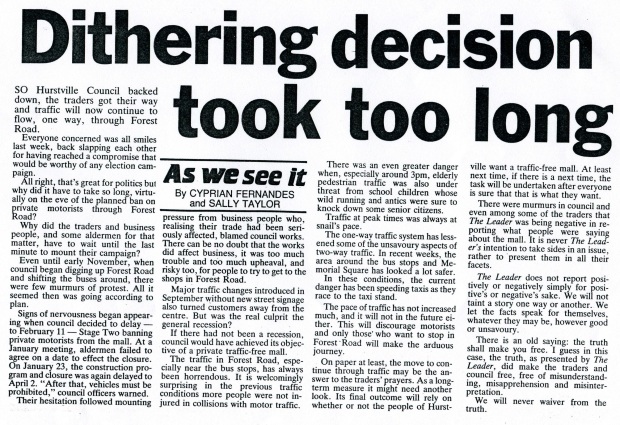 You can imagine the big cheeses at Westfield sitting around laughing at this mayhem, which only served to strengthen their position in Hurstville.

But by 1998, Westfield’s gloss was starting to wear off. Another ten years had passed, and in that time international standards had increased again, Westfield Miranda had expanded to become even bigger again, Westfield Burwood was slated for demolition to be replaced by a more modern centre, and many of the heavy hitters of the mid ’90s were winding down. The ever-shifting plates of retail had unsettled giants like Brashs, Toys R Us and *sniff* Intencity, which was replaced by Target in 1997.

Even the cinema was starting to lose its sheen, seen by locals as a hangout for thugs and hoodlums, as was the neighbouring food court. Suddenly, it didn’t feel so good to shop at Hurstville. 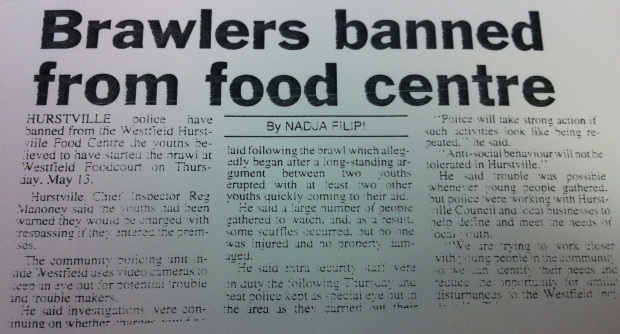 The social climate of Hurstville was something that neither council nor Westfield stopped to consider at any time, especially when they were bulldozing houses to expand the shopping centre. That Hurstville was becoming increasingly multicultural didn’t seem to occur to either entity also, only becoming apparent when it was too late to repackage and restructure the complex to suit the suburb’s new needs. I wonder if Westfield ever stopped to wonder why it was suddenly filled with cheap $2 junk shops and mobile phone accessory outlets?

Today, it’s a far cry from the glory days. This year marks Westfield Hurstville’s 35th anniversary, and you can’t half tell. Let’s take a quick tour.

‘Shoppingtown’ no more. Yeah, that was the most dated part of the whole thing, Westfield. 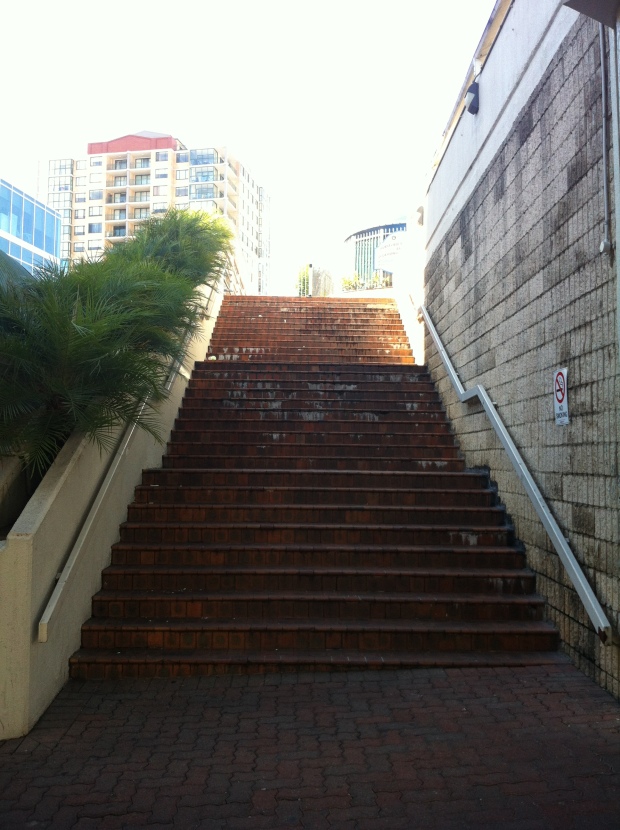 The snow has melted…

Here are the steps that once took those of us craving fresh air and nature up to Snowy Hill Park. Now it’s a place to smoke while you’re waiting for your kid to emerge from the daycare centre. See those bushes to the left? That’s all you’re getting. 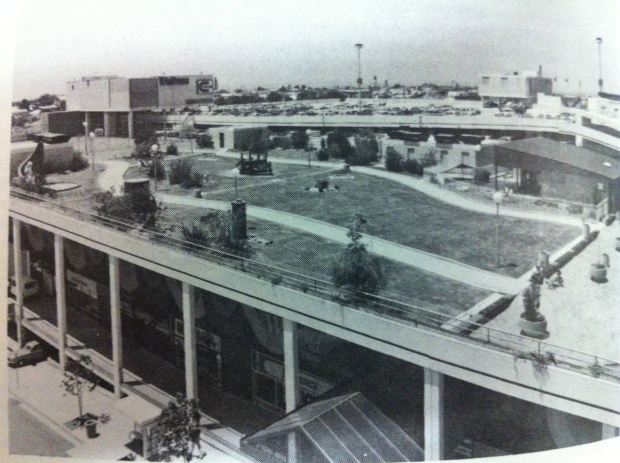 Mediocrity and unpleasantness all under one roof.

I don’t understand how only some of the floor tiles are stained. How does that happen?

Not really all that jolly, is it?

Jolley’s Arcade lives on today with this dated entrance to a dungeon filled with a pretty dire selection of shops, with the fashionably incongruous Fevercast a notable exception. I wonder if they still pay less rent?

Is that guy in the trackies taking a selfie?

When even Westfield became too depressing, the threatening youth moved outside to hang around. Not quite the pedestrian mall council envisioned, I’m guessing. 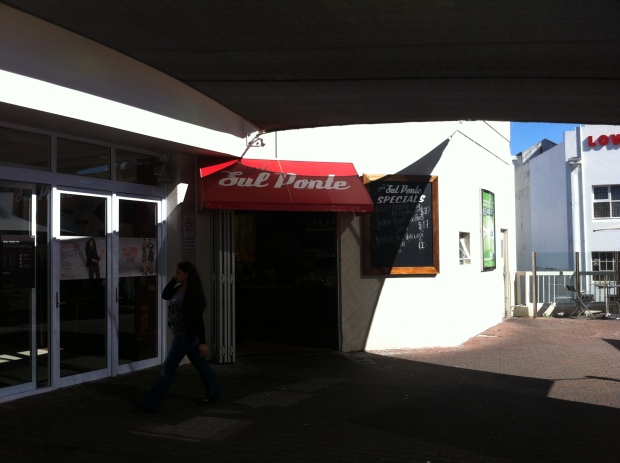 Not pictured: Sul Ponte’s clown mascot. Hey, it worked for the last tenant…

What was once a dedicated McDonalds restaurant was cut in half with the 1990 extension, and today it’s Sul Ponte cafe. McDonalds’ original seating arrangements remain inside, but the burgers themselves have moved up to the food court outside K-Mart.

Don’t put a target on the side of your building, it’ll only encourage them.

Park Road was built over in 1990 to create this shopping overpass. On the left is the original Westfield, although the carpark on top was added in 1990.

A rose by any other dead end…

This is all that remains of Rose Street today. That music lessons shop looks ancient enough to remember when it was a full street.

In the scheme of things, Westfield seems to have moved on and forgotten about Hurstville. They don’t even bother to charge for parking. The corporation has realised that the true profits are to be had in places like Bondi Junction and Pitt Street Mall, and it’s safe to say that ‘Hurstfield’ will not be receiving further extensions.

What was once hailed as Hurstville’s saviour undoubtedly proved its greatest nemesis and ultimately, its assassin. The damage is done, the parasite has sucked the city dry, and the glory days are long behind it. Visiting today is a depressing, colourless experience heightened by the assorted mental patients who frequent the centre. It hasn’t just become a part of the Hurstville experience, it has become Hurstville. Without the centre, the suburb would become nothing.

And given the state of the centre, I’m not so sure that hasn’t already come to pass.

I’d like to wrap this saga up by sharing a letter that I feel is wonderfully succinct, poignant and devastating all at once. This was published in the Leader, November 1 1990, and shows astounding foresight/cynicism. The writer must be dead by now, so RIP Frank, and RIP Hurstville. 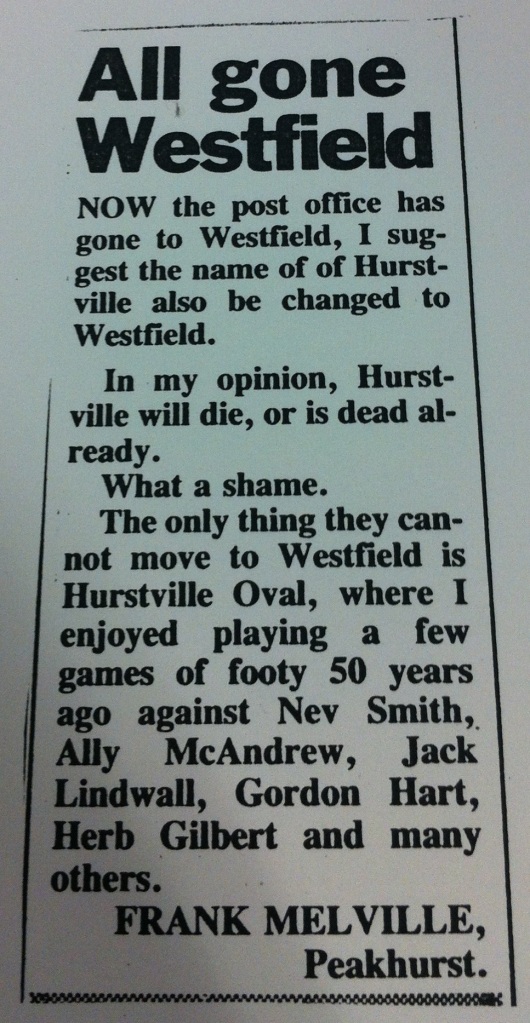