Orange Lodges and Protestant Halls – these were the two staples of any Australian country town in the mid 1800s. If, like Taree, you were caught with your pants down as late as the 1870s, well, you’d be getting to laying that foundation stone quick smart, and you’d better make sure you do it in the presence of a large number of people:

Protestant Halls have all kinds of amazing uses, not least of which is playing host to an extensive and exuberant round of preaching:

Why Reverend McIntyre, what a lovely sermon about the evils of alcohol! In most country towns, the Protestant Hall was the hub around which the town grew. Well, you know, aside from the pub. And speaking of which, I’ve seen the future and it will be:

There’s something extremely sacrilegious about this, isn’t there? I don’t think it stands for Beer, Wine and the Holy Spirit, either.

Despite the incongruous, blasphemous tenancy, the building is still damn photogenic. Wha? Oh no, I meant darn!

The Rawson Institute for Seamen/Bar100 – The Rocks, NSW 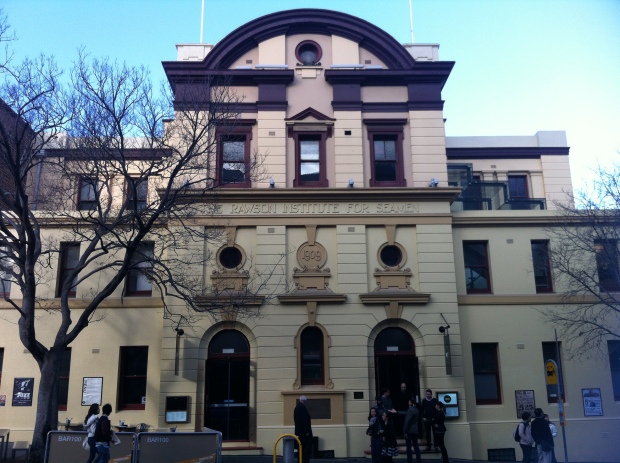 The snigger-inducing Rawson Institute for Seamen opened in 1859 as the Mariners’ Church, a missionary effort by the Bethel Union which followed two similar sites in Darling Harbour and Circular Quay. After initial success, the Bethel Union fell on hard times at the turn of the 20th century, and in 1895 the Church was leased to the Missions to Seamen. So wait, one seamen missionary group met financial hardship operating out of this place…and another one jumped in to take its place? Were the owners named Bond and Packer? 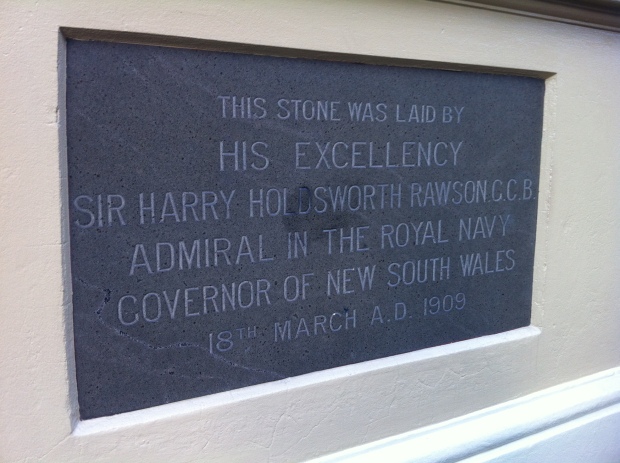 Sir Harry Rawson, who was appointed NSW Governor after his productive and incident-free trip to Benin, got a piece of the action once his governorship ended in 1909, proposing extensions to the building so important that the complex was renamed after him. Seamen everywhere could thank Rawson for providing them such a luxurious institute.

By 1960 things like this had fallen pretty much by the wayside, and the Bethel Union limped back to Flying Angel House, while the Rawson Institute became in 1981 home to the hitherto-unknown-by-me Craft Council of NSW, which lasted until 1990. Subsequently used as an art gallery and cafe, in 2011 Rawson’s changed hands yet again to much consternation. The new tenant, Bar100, hopes to rival that seamen’s institute of a different kind, the notorious Ivy nightclub. You’ll need a lot more than the name, guys.

IJK Computers have the right idea. By replacing Enfield RSL with a computer shop, they’ve guaranteed that oldsters looking for the former establishment won’t dare to come inside. It’s like replacing McDonald’s with a gym. Confusing matters is the Christian City Church, which also resides inside (or C3 to their friends, as per their mind-blowing website).

In what seems like surefire talkback radio fodder, even the memorial fountain outside has been removed, and the old RSL sign repurposed as a canvas for IJK’s striking logo. How did Alan Jones not stop this crime against Australia? As wars are fought less frequently and pokies tighten their stranglehold on clubs and pubs, we have to face the reality of a diminishing need for RSL clubs. Who knows, one day IJK may have replaced RSL as a familiar acronym.

On a stormy night in 1996, the Church of Scientology made its mark on the George Street entertainment strip in the form of Sydney’s most bizarre advertising initiative. The site, on the east side of George Street, was formerly the Roma Complex; a row of shops including the Roma cinema torn down in the early 1990s to make way for the current setup. Now comprised of a variety of smaller shops, the address is most notable for including the Metro Theatre, a popular music venue, and as the former home of Galaxy World, a video arcade.

Someone in the Church of Scientology saw an opportunity to educate the people of George Street in the ways of Xenu et. al., and in mid-1996 a giant illuminated volcano facade was erected above Galaxy World, with a giant video screen at the peak. The screen played commercials for Scientology founder L. Ron Hubbard’s 1950 book Dianetics over and over and over as smoke burst from the volcano, while testing centre was established nearby so that anyone interested in the ad could have their situation evaluated by the experts. What had been originally intended was that the screen would be directly used by the Church of Scientology to advertise the religion/cult, but after that proposal was denied by the Sydney City Council, a compromise was reached in the form of the Dianetics ads. Celebrity Scientologists Kate Ceberano and Nancy Cartwright appeared at the unveiling, which was forced inside due to the thunderstorm.

After just a few months, the brightly coloured volcano had faded, and so had the public’s compulsion to humour the Church of Scientology. Then-Sydney Lord Mayor Frank Sartor offered to pull the volcano down as early as November 1996. At some time in 2000, long after the advertisements had stopped erupting, the facade caught fire, and remained in its burnt state for nearly a year afterward. When the volcano screen was first erected, it was agreed that it would only be up for six years, but here we are in 2012 and although the volcano is gone, the screen and an ugly facade remain. It’s a surprise it’s still there, given Sydney City Council’s tendency to overhaul all things George Street every couple of years. 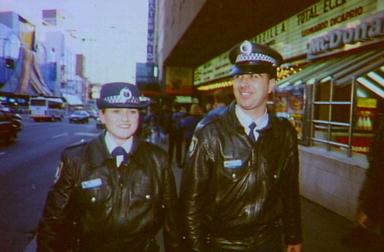