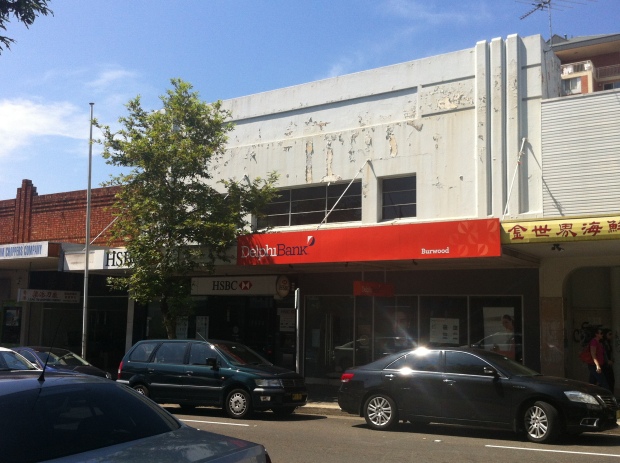 In further evidence that the world is an evil place, I present to you Exhibit ZZY. Once a quaint, harmless little art-deco Coles supermarket and variety store, this Burwood Road location now offers only a variety of soulless banking institutions, neither of which could afford decent paint: 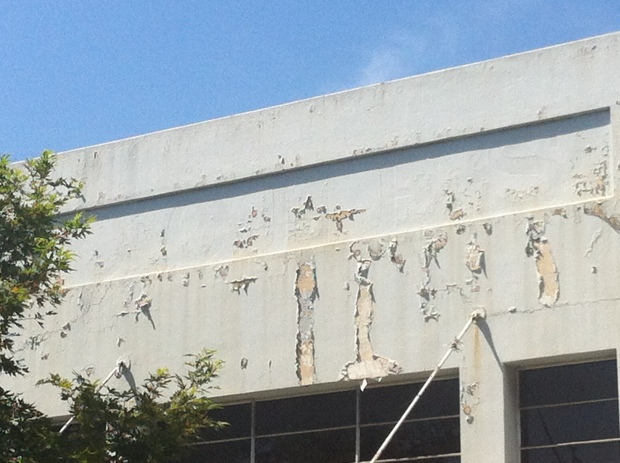 While we’re on the topic, remember when Coles was just a supermarket? Now, each Coles pretty much functions as a bank: you can withdraw, deposit, you wait in a long line to get treated like dirt, and they assault you with painful television ads in your own home. In a further chilling parallel, Coles is even attempting an insurance service now, which by all accounts seems to be going over as well as those Status Quo ads.

Don’t you want me, baby?

You were once a pizza restaurant and a cocktail bar…

Don’t you want me? AAAOOOOWWWW

Yes, you know you’re looking into the past when you’re dealing with cocktail bars, lurid green lettering and a perceived difference between a booking and an advance reservation. What is it about those old signs that were built to last so long? Do you think that 40 years from now someone will be writing about that charging station in Burwood that used to be Kuo Fu?

There’s no telling just how old the Super Pizza restaurant is, but judging by the font and presentation it’d have to have started in the early 80s, if not late 70s – perhaps named off the back of 1978’s hit film Superman. If we go back to the 1920s, 232 Burwood Road was home to Mellor Bros Electrical and Radio Supplies.

It probably took up the whole building. Today, aside from being the home of Burwood’s funniest spoonerism, the upstairs section that was once the scene of so many smoky Saturday nights at the cocktail bar set to the then-ubiquitous warble of the Bee Gees is now…a mortgage broker.

The least they could have done was call it Super Picadilly.

It may be extremely subtle, but at least their signage doesn’t force you to crane your neck. I’d like to think they still offer ‘super fast home delivery to your door’. 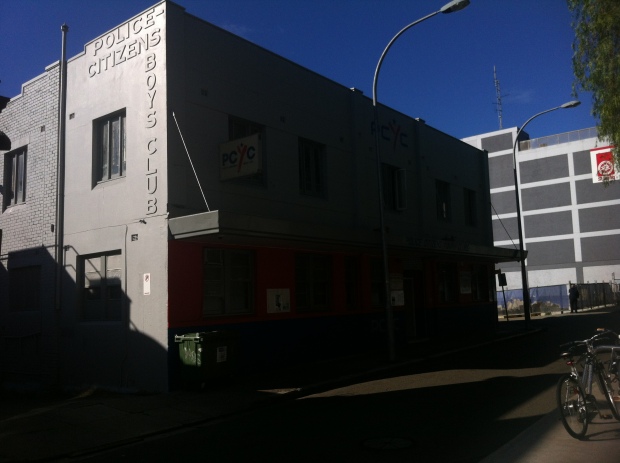 According to the side of the Burwood branch, it’s about boys. Who knows, in another 75 years, it may even include old people. 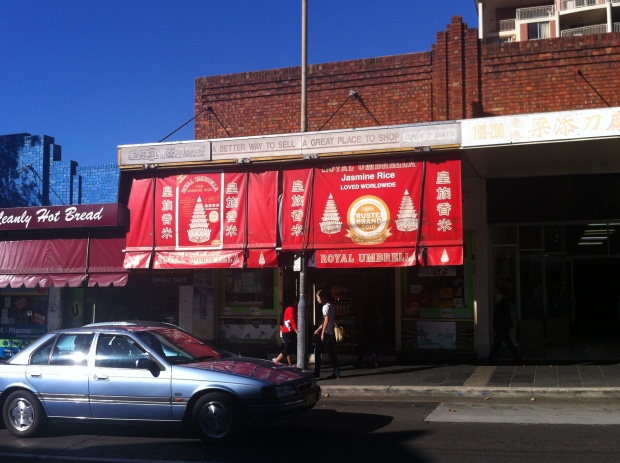 I bet birds love that sky blue building next door.

When Cash Converters first appeared in Sydney in the early 90s, they were pushing themselves as the legitimate pawnbrokers. You could feel just as comfortable walking in to purchase a ghetto blaster as you could walking in to hock one. In fact, destigmatising the act of hocking was something Cash Converters actively tried to work towards. In the eyes of the Cash Converters you weren’t some junkie whose true intentions were the china white elephant in the room, you were a valued customer. Even the name Cash Converters subliminally worked to suggest ‘Hey, you’re not hocking anything. You’re converting your unwanted goods for cash, and we’re making it happen. Aren’t we great?’

By 1996 the honeymoon was over. The true junkies and dodgy dealers had managed to corrupt the brand, and once again reputable folks were ashamed to be seen there. In the last five years they’ve staged a comeback of sorts (Cash Converters, not reputable folks), and it seems to be working. In fact, there already is a Burwood Cash Converters, but it ain’t this one. This, a little further up the street, is their first aborted attempt at converting Burwood’s cash, and it’s telling that when they went back for a second try, they gave this place a wide berth.

I know that sky looks Photoshopped, but I swear it’s untouched.

The lack of care put in the first time around is evident – the Cash Converters sign is crudely stuck over yet another sign. It even sports the chain’s tagline of the early 90s, which gives me an excuse to post this ad. If I could put it in every post, I would.

Today, the shop is occupied by an Asian supermarket, a proud retailer of globally beloved jasmine rice Royal Umbrella. They’re also clearly very proud of the ‘Trusted Brand’ award they won in 2010, an honour I’m guessing has never been bestowed upon Cash Converters. By the way, if you’ve still got the Cash Converters jingle stuck in your head, head over to the Royal Umbrella site and get a load of theirs. And remember – the whole world loves. 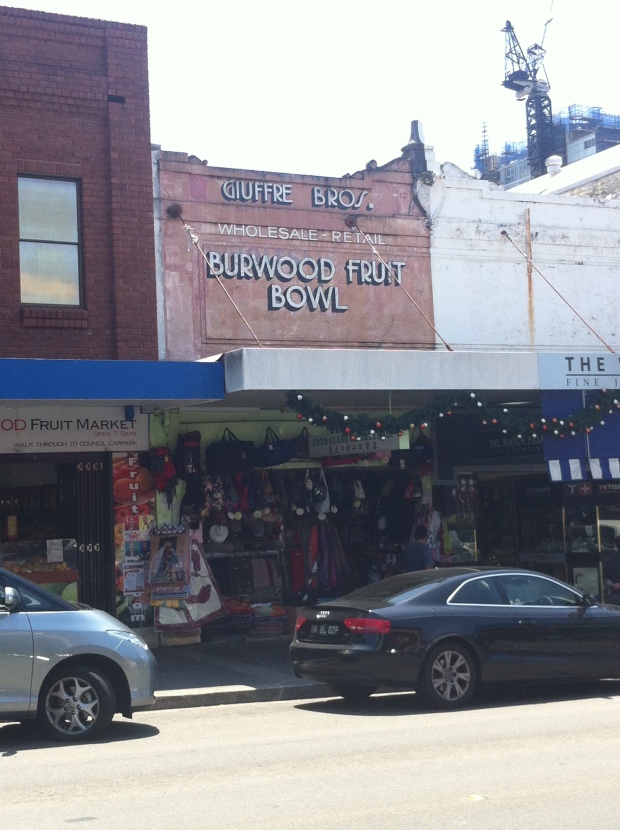 Even as the cranes of development encroach upon Burwood Road, the clogged vein that runs between the Hume and Parramatta arteries, it’s still possible to find hints of the past. For example, here we have the Burwood Fruit Bowl, run by the Giuffre brothers.

According to the can’t-believe-it-exists Sydney’s Italian Fruit Shops dot com, a Carlo Giuffre managed a fruit shop on Burwood Road from 1910-1916 before leaving the country in 1918. Repeat: that was his reaction in 1918! Imagine if he saw Burwood Road now! Sands directories from 1908-1912 mention a Giuffre Bros fruiterer in the Newtown area, but no word on whether they employed their clever-once shop name a second time. Whether his brother stuck around and kept the shop going is also unknown, but it certainly requires a hefty suspension of disbelief to imagine this was the 1916 shopfront.

The font used in today’s vintage shopfront signage to me seems very 20s, and certainly striking enough to keep around…at least until the bulldozers get to work. Until that time, the Chen Guang Variety Shop provides Burwegians (c’mon, give me that one) with all the junk they’ll ever need, while the neighbouring Burwood Fruit Market fills the street’s Giuffre-shaped void with fruit as blandly efficient as the shop’s name.