I bet birds love that sky blue building next door.

When Cash Converters first appeared in Sydney in the early 90s, they were pushing themselves as the legitimate pawnbrokers. You could feel just as comfortable walking in to purchase a ghetto blaster as you could walking in to hock one. In fact, destigmatising the act of hocking was something Cash Converters actively tried to work towards. In the eyes of the Cash Converters you weren’t some junkie whose true intentions were the china white elephant in the room, you were a valued customer. Even the name Cash Converters subliminally worked to suggest ‘Hey, you’re not hocking anything. You’re converting your unwanted goods for cash, and we’re making it happen. Aren’t we great?’

By 1996 the honeymoon was over. The true junkies and dodgy dealers had managed to corrupt the brand, and once again reputable folks were ashamed to be seen there. In the last five years they’ve staged a comeback of sorts (Cash Converters, not reputable folks), and it seems to be working. In fact, there already is a Burwood Cash Converters, but it ain’t this one. This, a little further up the street, is their first aborted attempt at converting Burwood’s cash, and it’s telling that when they went back for a second try, they gave this place a wide berth. 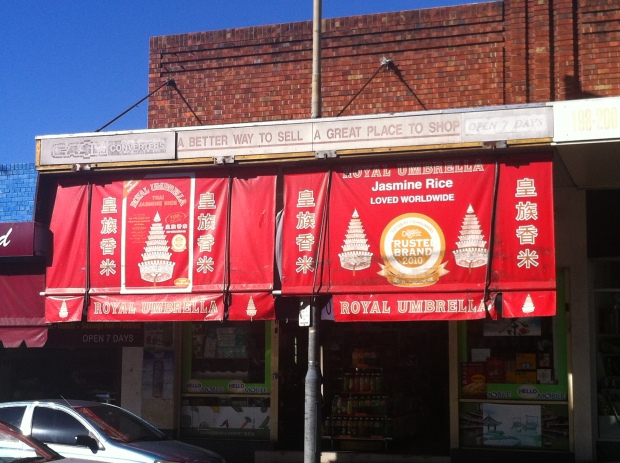 I know that sky looks Photoshopped, but I swear it’s untouched.

The lack of care put in the first time around is evident – the Cash Converters sign is crudely stuck over yet another sign. It even sports the chain’s tagline of the early 90s, which gives me an excuse to post this ad. If I could put it in every post, I would.

Today, the shop is occupied by an Asian supermarket, a proud retailer of globally beloved jasmine rice Royal Umbrella. They’re also clearly very proud of the ‘Trusted Brand’ award they won in 2010, an honour I’m guessing has never been bestowed upon Cash Converters. By the way, if you’ve still got the Cash Converters jingle stuck in your head, head over to the Royal Umbrella site and get a load of theirs. And remember – the whole world loves. 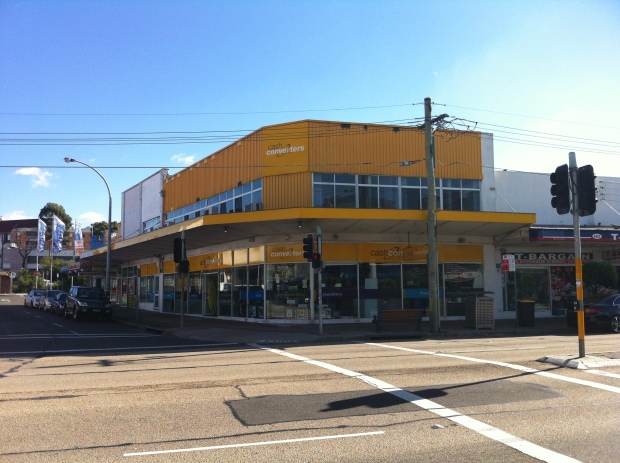 A pawnbroker adds a a kind of uncertainty to an area. If you’re walking through a small shopping arcade and one of those shops is a second hand goods seller, it’s unsettling. You make the connotations in your mind – plenty of stolen goods in there, all sold by junkies, this neighbourhood mustn’t be safe, look at all the Playstations etc etc. Without casting aspersions, Rockdale has always had a pawnbroker on the main strip of the Princes Highway in one form or another; Cash Converters, colloquially known as ‘Crime Converters’ or perhaps more favourably to the company, ‘Cashies’, isn’t the first. In fact, it wasn’t even the first business at this location. Tear your eyes away for just a moment from the framed ‘signed’ pictures of pop singers and their CDs and have a look at what was once the welcome mat: 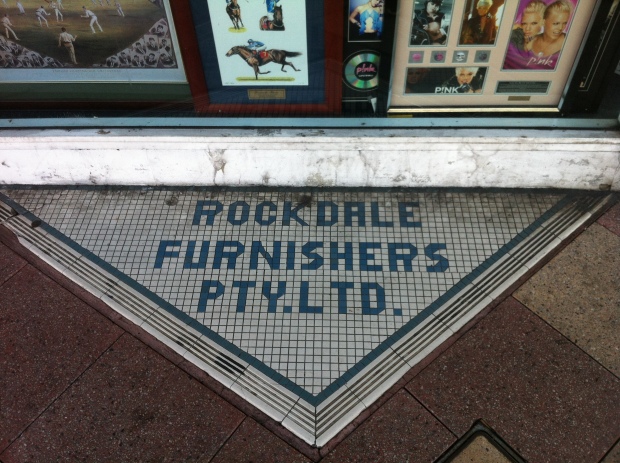 Gadzooks! This was once the front entrance to Rockdale Furnishers Pty Ltd, which has been around for the last 80 years. When this location become unfeasible for the sale of furnishings (and these things can happen) they moved down the road to West Botany Street, where they exist today, and the building itself became cash converted. Despite that, Rockdale Furnishers managed to leave their mark for all time in a most unusual way. Before we go, I’ve gotta share this old Cash Converters commercial. It’s from a more innocent time; Cash Converters had only been around for a decade, and were attempting to present themselves as a friendly, budget-minded alternative to the retailers of the day. Note the lack of Kappa pants and hoodies among the patrons. Also note the jingle, which has been stuck in my head while I wrote this article. Thank me later: