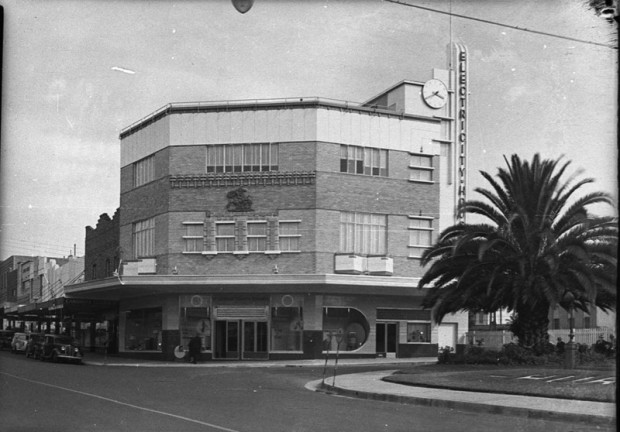 The St. George County Council was established in 1920 to control the distribution of electricity within the Municipalities of Bexley, Hurstville, Kogarah and Rockdale, and was the first of its kind in Australia. In 1939, this building was constructed for the St. George County Council, presumably as a way of showing off just how fancy and powerful the Council was. During the early years of the SGCC, it was reported that St. George residents enjoyed the cheapest electricity in the country. 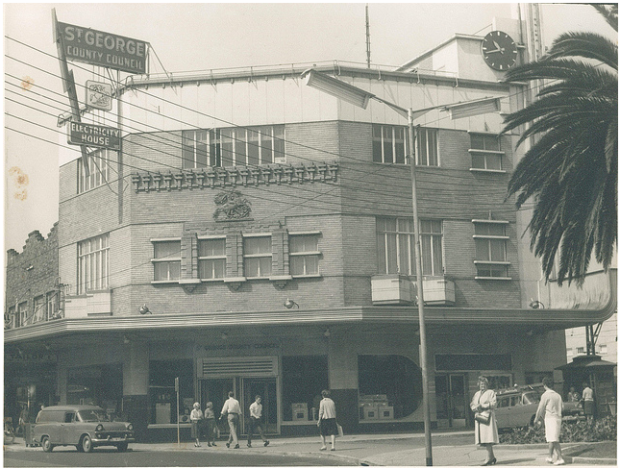 By 1963 it appears that most of the county’s electricity was being distributed right to this building, what with all the neon signs. Absolute power corrupts, so to speak. The St. George County Council enjoyed its name up in lights until 1980, when it was amalgamated with the Sydney City Council, itself rebranded in 1991 as Sydney Electricity and in 1996, EnergyAustralia. Now, St. George residents pay too much for electricity just like the rest of us.

Today the building has become a branch of the Bank of China, among other things, and doubtless many electricity bills are paid here. They’ve still got the neon happening there in the bottom right, perhaps just to prove that they can. It’s for a dental clinic, not a place you often associate with neon signage. The clock is a poor facsimile of its predecessors, too; also, it doesn’t work.

It’s gotta be a kick in the tablets when you can only get the ex-Minister for Works & Local Government to unveil your building. Spooner, a Conservative, had resigned as Minister a few months earlier after publicly describing that year’s State Budget as ‘faked’. He was also responsible for regulating the appropriate cut of mens bathing suits, insisting on the full-length one-piece. Sort of like the Tony Abbott of his day, in that way.