If there’s one goal that’s proven consistently hard to achieve, it’s covering up an eat-in Pizza Hut. There seem to be two typical approaches: the first is to make a genuine effort to alter the building and hope no one recognises. It doesn’t always work. The second is to just embrace the hallmarks of the former tenant wholeheartedly, and who better to breathe new life into someone’s sloppy seconds than the Salvos?

Inside, if you can look past the piles of instructional golf videos and copious amounts of Fifty Shades of Grey, it isn’t hard to spot the former Hut infrastructure that hasn’t already been sold off. Heck, someone probably walked away with the original oven for a bargain price, and I’m kicking myself right now that it wasn’t me. 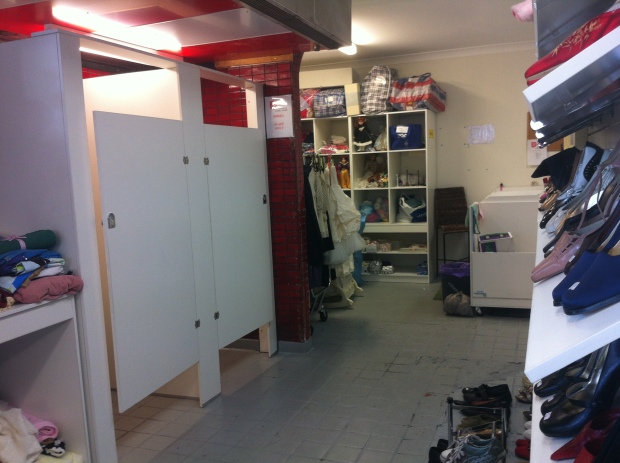 Even the toilets have been put to a more hygienic use (but not by much) as change rooms. And no, I would not count among the highlights of my blogging career standing in the middle of a Salvation Army and taking a photo of its change rooms. It’s all for you, Damien. 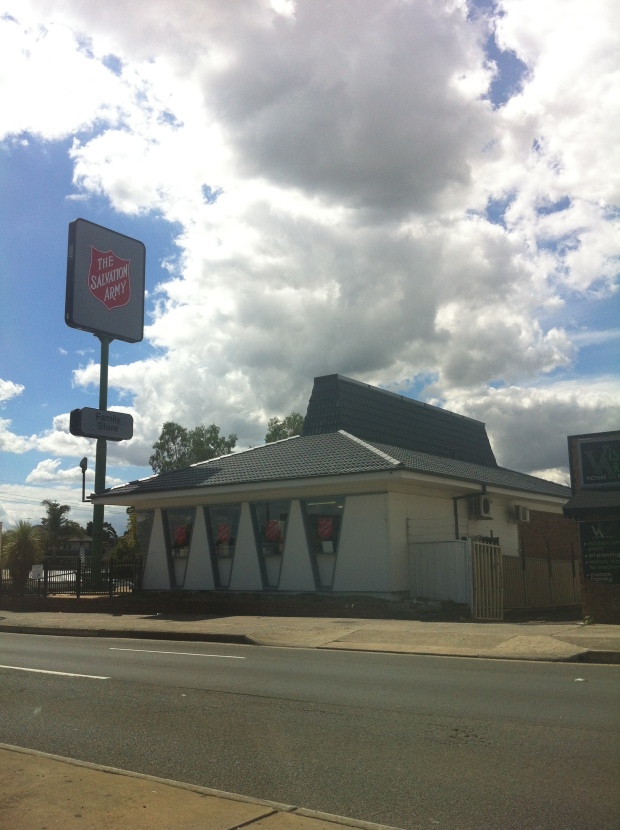 When my generation returns to the earth and Pizza Hut’s eat-in legacy is forgotten, will people wonder why these buildings look so odd? Probably not.

First of all, yes, I know there’s been a long delay in posting lately. Present life suddenly took priority over past ones, but I haven’t gone anywhere, and by no means has Sydney run out of material for Past/Lives. There’s plenty to come! For instance…

Here’s a massive insult if ever there was one, and in light of my repeated monologues about Pizza Hut’s former dine-in dynasty, this feels like a particularly personal one. If it wasn’t bad enough that yet another Pizza Hut restaurant had to close, to add insult to injury it was replaced by not one but two inferior wannabes.

When I was younger, taking sides in corporate wars wasn’t uncommon. If you had a Billabong backpack, you were instantly the enemy of anyone carrying their stuff around in a Quiksilver one. Overheard bragging about getting KFC for dinner by the McDonalds clique? You’d be ostracised for the rest of the term, or until you could produce a Happy Meal toy of Ronald riding a tricycle to cement your allegiance. Let me tell you, playgrounds are vicious.

Never were these feuds more cutthroat than the endless battle between Pizza Hut and Domino’s. At the time, Pizza Haven and Arnold’s weren’t really entities, Eagle Boys had yet to develop sentience after that toxic spill, and fat guilt hadn’t gotten strong enough to usher in the rise of Crust. In the mid 90s, you had two choices. Pizza Hut had been established in Australia for 13 years when Domino’s made its play for a Down Under takeover in 1983. In those early years, Domino’s might have seemed preferable; they were new, offered a completely different menu, and were the first major pizza chain in Australia to do home delivery. To immobile pizza maniacs everywhere, this was a good deal. Pizza Hut couldn’t take that lying down, so they started their own delivery service, complete with iconic jingle. Sadly, this meant the beginning of the end for their dine-in service, which to the fast-food pizza connoisseur was the one clear advantage they had over Domino’s. Could you eat ALL YOU COULD at Domino’s?

Domino’s got an early popularity boost in that the Teenage Mutant Ninja Turtles movie featured the brand as the Turtles’ pizza of choice, but smart kids knew better. First of all, the Domino’s pizza Leonardo and company chow down on in the film looks repulsive, and second, the Nintendo TMNT game featured Pizza Hut branding throughout. The game featured the real, actual Ninja Turtles, and not just guys in suits. Kids know the difference.

Above all, Pizza Hut was just better than Domino’s. To put things in perspective, Domino’s was like the Channel 7 to Pizza Hut’s 9, the Woolworths to the Hut’s Coles, the Pepsi to Pizza Hut’s Coke. The perception was there that Domino’s just wasn’t as good, and one trip to ALL YOU CAN EAT was enough to sway the doubters. Things have obviously changed in the last 13 years, which is what makes the above scene that much more of an abomination.

And as far as Subway goes, take all the negative energy towards Domino’s imbued in the above passage and quadruple it. More like NOway.

Don’t let the graffiti, overgrown weeds and the video shop sign fool you – this location is still in operation as a video shop. But it’s a video shop…WITH A SECRET.

Despite being bright purple, you don’t look too out of place, Network Video. You’ve got a disabled ramp there, a big carpark…strange roof you’ve got there, though. Looks like you, uh, added on the part of the building to the right of this picture much later. You know, the part without that…funny looking roof… Anyway, you mind if I have a look around the back?

Gee, that’s a hell of a thing. Your wall there, Network Video…it’s taller than your roof. Now why would you design it like that? And you don’t look so purple back there. It’s brick… Ah, it’s probably nothing. Just my mind playing tricks. Maybe you were a house once, that wouldn’t be so special. Okay, thanks for your time, I’ll get outta your hair. Take it easy.

Oh, just one more thing. Can I have a look around the other side, between the building and the fence?