Goldfinger said, “Mr Bond, they have a saying in Chicago: ‘Once is happenstance, twice is coincidence, the third time it’s enemy action.'”

Sydney is a multicultural city. From Bondi in the east to Blacktown in the west, from Narrabeen in the north to Cronulla in the south (well, maybe not Cronulla), it’s not hard to argue that the city has come a long, colourful way since the White Australia of the 1950s.

But long before even that decade, influences of another culture were finding their way into what was a very British way of life at the time, influences that have come to be embraced as the preferred way over time.

Prior to 1788, the British used its North American colonies as a penal dumping ground, auctioning off convicts to plantation owners and other slavery enthusiasts. But when the American Revolution brought that to a halt, the former colony quickly established its own identity as the Empire scrambled to find another outlet for their unwanted lawbreakers.

By the early 20th Century, the American style as we know it today was pretty firmly established, particularly through the film industry blossoming in Hollywood. The extent of the influence of American films around the world is so massive as to be unknowable, but we’re certainly going to know a little part of it today.

Smack-bang in the middle of the Grand Parade that marches through Ramsgate and Brighton-Le-Sands along the shores of Botany Bay is the broad cleft that is President Avenue. 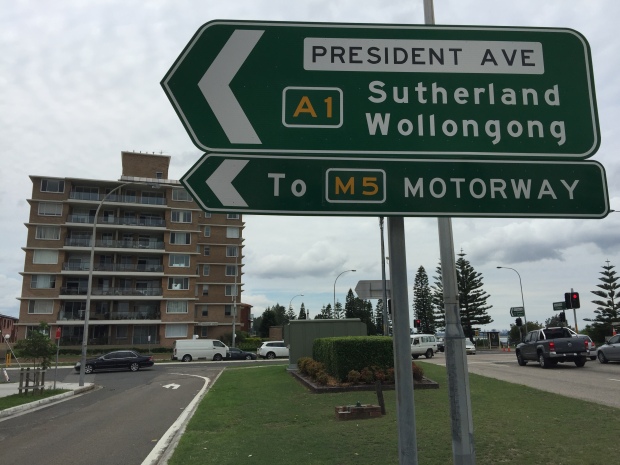 Along the aptly named President Avenue, everything is presidential. From this palatial block of units reminiscent of Goldfinger‘s Miami…

…to this capital lodge… 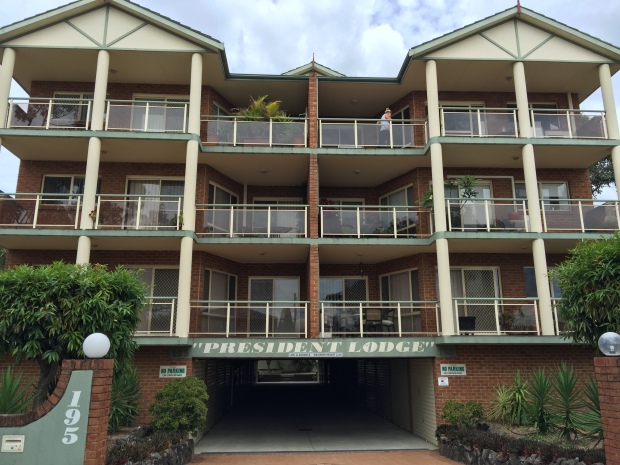 I think I can see the president up the top there.

…everything on the avenue fits the bill.

Clearly the ‘P’ has become the victim of vandals.

It’s the suburban equivalent of the kind of aged, staid, rich white guy we generally associate with the US presidency, so perhaps it’s no surprise that it borders today’s subject: Monterey, a young, small suburb that’s essentially comprised of four major streets.

Monterey’s insecure, slightly murky, and largely unofficial history finds its origins in 1877, when it was a piece of Scarborough Park. Jacob Marks, a prominent Jewish property developer, bought a parcel of land in the area, which was beginning to boom thanks to the popularity of the nearby Lady Robinsons Beach and Sandringham Baths. Marks had 13 kids (!), one of whom lived (and died) in California, so when it came time to name the streets in his property, things got red, white and blue pretty quickly.

Here’s where things get a bit cloudy – the street names were carved into stone by 1903, but it’s unclear who named them, and then it wasn’t until the early 1920s when the subdivision went up for sale.

Up for grabs. From the Lance Giddings pitch, 1921. Image courtesy Rockdale Library

The sale was orchestrated by a WWI veteran/motor racing enthusiast/socialite named Lance Giddings, who injected a healthy dose of American panache into the sale. Unfortunately, things didn’t quite take off.

“The enthusiastic advertising copy and promotion produced considerable sales over the next six years but these sales did not result in building. While Council records list and identify considerable lot ownership after 1921, the Sands Directory of 1924 could only find a single Monterey resident, Mr Hugh Macan in Pasadena Street, for its listing.” – Fibro Moderne: Mid-20th Century Fibro Housing in Monterey NSW (Bogle, Pickett 2013)

Even by 1930, the suburb only had five residents. Imagine the parties! Fat bass gramophones uninhibitedly pumping out block-rocking beats of Whispering Jack Smith with the nearest neighbour at least 15 minutes walk away!

Inevitably, the post-WWII housing boom took hold in Monterey, and by the 1950s it was a bustling suburb; although not so bustling that it wasn’t partially gazetted in 1951 for a potential Southern Freeway extension from Waterfall to St Peters. Interestingly, it remains gazetted so today, so if you’re a resident, don’t get too comfortable.

Now, let’s take a look at those street names. When you’re heading south from President Avenue, the first one you come to is Banks Street.

And that’s American! Because banks are…American and…uh, evil, and…how does the rest of that go? Big banks? Big oil…

No, the real Monterey gets started further down, with Monterey Street.

The name Monterey has its origins in Monterrei, Spain. So revered was Gaspar de Zuniga Acevedo y Fonseca, 5th Count of Monterrey (as Monterrei had become known by the 1590s), that Monterrey, Mexico was named in his honour by the conquistadors. Subsequently, in 1602, when it came time to name a newly discovered bay in what is now California, the Spaniards went with Bahia de Monterrey, which eventually evolved into Monterey Bay, which itself lends its name to the nearby city of Monterey, which then became the capital of Alta California. When the United States won the Mexican-American War of 1846-47, California was annexed by the USA right there in Monterey. The city went on to be the site of the first theatre in California (a state now synonymous with show business), and is famous for its cheese. Whew! 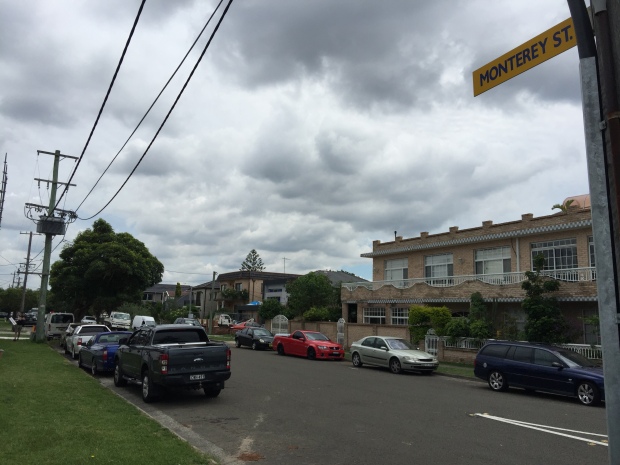 Not that kind of cheese…

Now look at Monterey Street, Monterey, with all the trappings of Australian suburbia. Does it bear the weight of all that history? Hell no.

Next up is Pasadena Street, and you’d better believe it’s full of little old ladies. Pasadena gets its name from the city in Los Angeles County, a city that dates back to 1886 and is named for a Chippewa Native American term meaning ‘of the valley’. I’m starting to feel that not a lot of thought went into these street names… 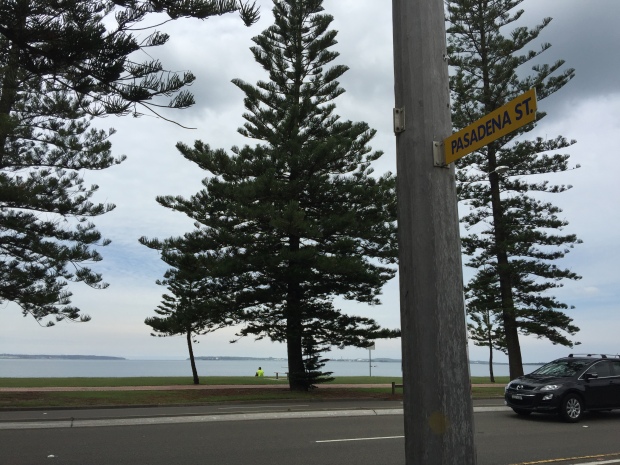 In fact, the most interesting thing I can say about Pasadena Street is that it comes out directly across from Botany Bay. Look at that picture above. That gap in the land is the mouth that flows out to the Tasman Sea, from whence the Endeavour, for better or worse, arrived in 1770.

Again, too much history comes down, crushing the street’s thin veneer of banality, exposing nothing beneath. 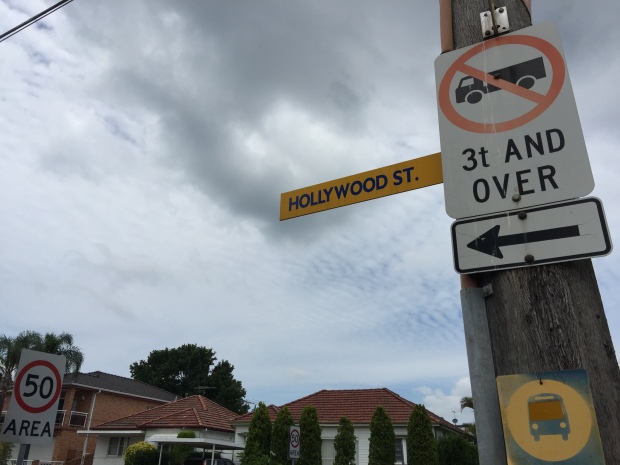 Inevitably, there’s Hollywood Street. At the time of its christening, 1903, Hollywood, California had only just been incorporated as a municipality. It wouldn’t get its first movie studio until 1912, so whomever named was showing some astonishing foresight.

Also astonishing is this house on the corner of O’Connell and Hollywood. Just look at it.

Finally, we have Culver Street. Culver City, back in Cali, is another one that didn’t really come to prominence until the years after this street was named. In Culver City’s case, it wasn’t incorporated until late 1917. Weirder still is that Harry H. Culver, after whom Culver City is named, didn’t even arrive in California until 1910! Who named this street?! 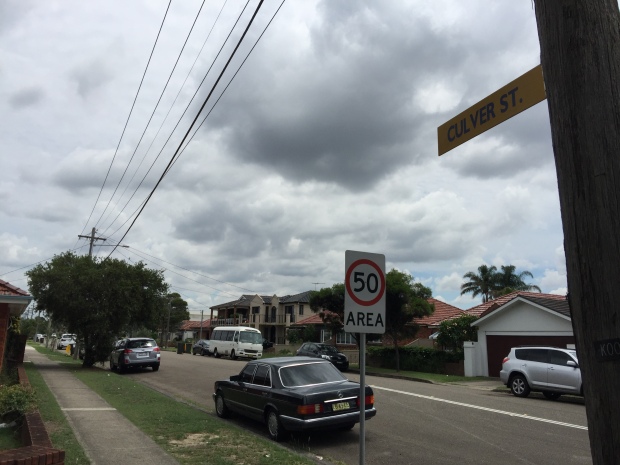 Sadly, the psychic who gave Culver Street its name didn’t foresee just how pedestrian it would become in later years.

Mystery still surrounds the naming of these streets. There’s no definitive record of anyone in particular having bestowed the names, and sources have varied throughout histories both official and unofficial over the decades. Even Rockdale Council has no idea, and it’s, like, their ‘hood. What gives?

In 1941, an attempt was made by council to name the suburb ‘Werribah’ for postal reasons. Rolls right off the tongue, don’t it? It didn’t take, and ‘Monterey Park’ was also rejected before settling on plain old Monterey. I mentioned postal reasons…that appears to be its own story, and we’ll come back to that another day. It’ll be worth the wait, I swear!

All the bickering over the name meant that the suburb’s designation Monterey remained unofficial until 1972, when the Geographic Names Board stepped in and shit got real. A local poll of residents of the four American-flavoured streets showed that Monterey was the preferred name for the area, and so it’s remained ever since. Now that was all quite interesting, wasn’t it?

Again, for better or worse, this isn’t the only instance of major American influence in the early days of Sydney. The origins of Monterey are an inauspicious start, but nevertheless interesting given how the whole Brighton area embraced the very Goldfingerian image of the USA from the 1960s onwards.

Shifting tastes, a tipping of the global power balance, and a propensity to bend over for Uncle Sam meant that quite a few changes – from the minor to the irreparable – were on their way.

That means you, Chelsea.

For more reading on Monterey and the fibro houses within, check out Fibro Moderne. Early to Mid-20th century vernacular housing in Monterey NSW, without which I could not have completed this article. So blame them.