Over the last year, you’re likely (I would hope) to have enjoyed a healthy bank balance, a good credit rating, a roof over your head. Simple stuff that the people of Sydney take for granted. Rick Damelian on the other hand…

When we last left the epic tragedy that is the Rick Damelian saga, things weren’t looking too good for both Rick and his former dealerships. Despite their desirable location along Parramatta Road at Leichhardt, the caryards, weren’t attracting any offers, and Rick himself was staring down the barrel of a pretty severe bankruptcy.

But hold on. Look there, in the window…is that what I think it is? Let’s take a closer look.

Your eyes aren’t deceiving you. In November 2012, these showrooms finally sold, and since then have returned to doing what they did so well at the peak of Rick’s success – selling cars.

Even on the roof, Rick’s private helipad has been obscured by a legion of cars. The staff might want to check to make sure Rick isn’t living in one of them.

Remember Ric’s Cafe, the on-site licenced restaurant that was the jewel in the crown of Rick’s decadence? It’s since been replaced by even more cars! It’s funny, Rick might not be in the situation he’s in today if he’d just thought to sell a few more cars instead of food and helicopter rides. Live and learn, I guess.

Further down the road, a modestly priced used car dealership has set up shop on Rick’s old turf. So toxic was the land, so tarnished was the site’s reputation as a car seller that the signs feel the need to be as explicit as possible: “WE BUY CARS! WE SELL CARS!”. It’s a trick Rick didn’t seem to be able to employ in his last years: speaking the language of the customer. Having cars onsite helps too, I’d imagine.

Rick’s old bedfellow, Honda, has returned as well. Formerly the core of Rick’s sales strategy, Honda left Rick holding the bag when the Japanese tsunami decimated their inventory, and some speculate that this marked the beginning of the end of the Damelian empire.

Yet here they are.

Fancy that: it’s easier to come back from the ravages of a tsunami than it is to survive Rick’s management. 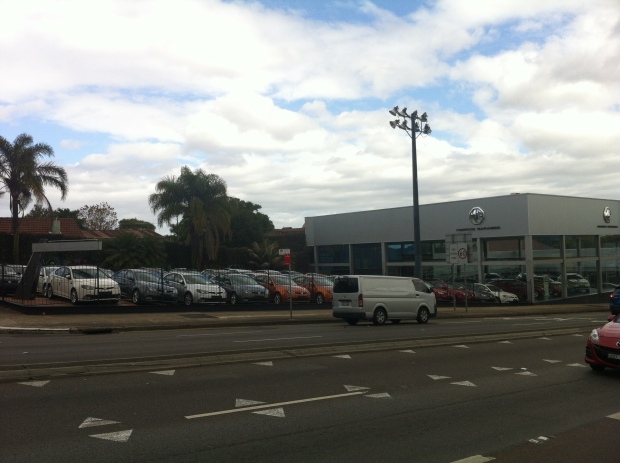 Over the road, Morris has set up shop at the old Rick Damelian Prestige lot. A few examples of Rick’s flamboyance remain: the floodlights, the pointless sign on the far left, the Hollywood-style palm trees. But the cold, impersonal MG style sits heavily at odds with these elements, further highlighting their uselessness. 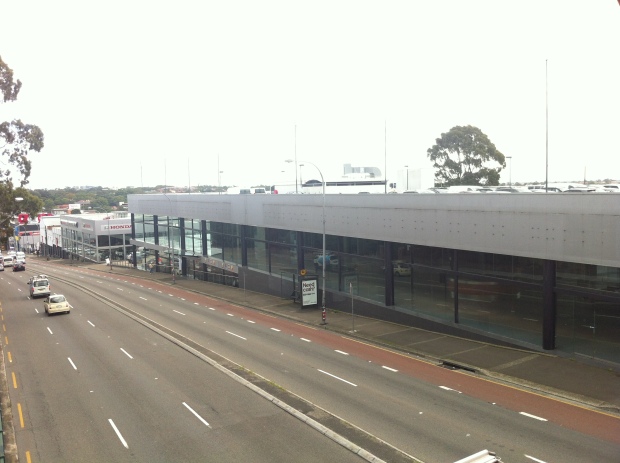 But fortune hasn’t been so kind to the man himself. As Rick Damelian and his wife sit together in their $3.3m McMahons Point townhouses, arguing over whose turn it is to heat up the beans tonight, the banks and other creditors hover over him like a hawk. Should he decide to sell his two townhouses – thereby leaving himself, his wife and his mother homeless – he’s so in debt that he’s likely to receive nothing. It’s reported that Rick has just $73 left in his bank account, and can’t even afford to buy a car. You really have to feel for his wife at a time like this…with no car, she may never get off her Ls.

After nearly 40 years in car sales, Rick’s biggest accomplishment was establishing his own name. That’s not necessarily a bad thing – take Dick Smith for instance – but it meant that Rick’s triumphs and tragedies didn’t stick to Honda, or Fiat or whatever brand of car he was flogging at the time, they stuck to him.

While it’s true that the financial crisis hit everyone hard, Rick’s lavish showrooms didn’t help him weather the storm. And since he put himself forward so often, it was his name that thousands daily saw stagnating as they passed his high-visibility caryards at the top of Taverner’s Hill.

No matter what should happen in the future, the name Rick Damelian will forever be tied to car sales, and there are plenty of dealers who would kill for that kind of association. At least in his downfall, Rick has provided a cautionary tale for the next generation hungry to make an impact as the world’s financial situation improves.

Fitting then, that it appears it’s harder to expunge Rick’s name from his old dealerships than it is from bankruptcy court.