In 1877, the Royal Agricultural Society of NSW decided to stage an international exhibition. As planning commenced, it became clear that the Intercolonial Exhibition Building in Prince Alfred Park wasn’t going to cut it as a venue. After applying some pressure on the NSW Government, which did not want to appear foolish on the world stage, money found its way to the right place, and the enormous Garden Palace was built in the Royal Botanic Gardens in only eight months, just in time for the exhibition.

The building featured restaurants, tea rooms, a fountain, and yet another statue of Queen Victoria. It contained the city’s first hydraulic lift (they really loved their hydraulic lifts back then, didn’t they?). It also boasted primarily timber architecture, which didn’t work out so well. 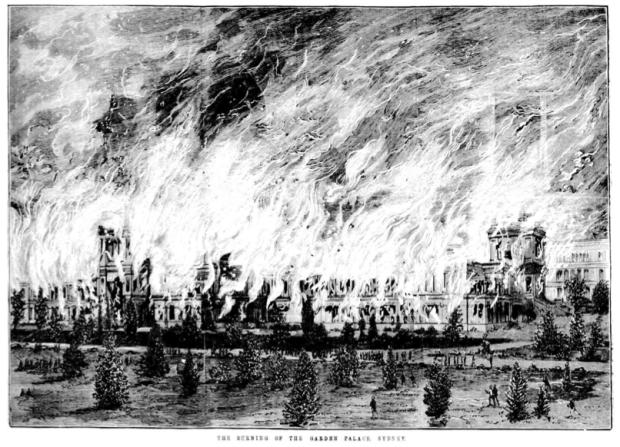 In late September, 1882, the Palace caught fire and burned to the ground. The cause of the blaze has never been established, but in the years following the International Exhibition, there was much consternation about what purpose the Palace would then serve. All I’m saying is, I’m sure there were a few people not sad to see it go. Mourners of the Palace seemed to be most upset by the wastefulness of it all, and by 1890 it had largely been forgotten.

These gates are the only reminder that it was ever there, despite having been erected in 1889 to commemorate the Palace. So wait, people were upset about the wastefulness of the Palace’s destruction, but were okay to build giant gates to a place that was no longer there? So Sydney, so chic…