Yes, I know it’s another laundry, but shops like these need their due. Besides, this one put more effort into its appearance than did the last one, so its failure and eventual closure is that much more tragic.

Going by the font it’d have to be 60s-70s, and it seems to have had a seven digit phone number so it lasted awhile. Even more interesting is that underneath the colourful Enfield Laundry paint job, you can see that the site was once a produce and firewood store.

The Strathfield Council seems to have given up hope that the shop will ever be used again, and has put this bench across the door as a barricade. Presumably, this took place after council gave every single household in the vicinity their own washing machine. 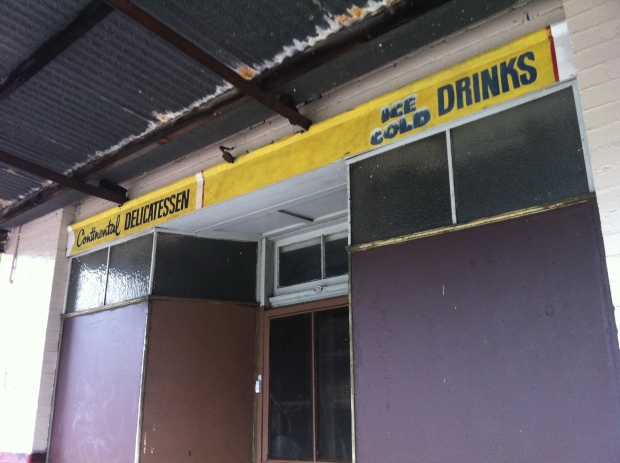 I love that ‘ice cold’ font. It’s so effective. I can get a strong visual sense of just how ice cold those drinks will be, and how refreshing that temperature would be to me on a hot summer’s day. But you have to consider, the logic of the ice cold drinks font dictates that that fancy font for ‘continental’ was intended by the designer to be somehow indicative of the continental experience. Strangely, it works. Deli meat seems so much more worldly when it’s preceded by that font.

It appears that what happened here is during the mixed business boom of the late 80s-early 90s, what was once a sole deli saw in the ailing laundromat an opportunity to branch out, and seized it. The laundry was absorbed and the deli offered a literal mixed business experience to the people of Enfield. It probably even had a Street Fighter II machine. But when the boom died and Burwood Westfield was renovated, the only customers were those getting off the bus of an afternoon, and you can’t pay the rent with profits from a few ice cold cans and packets of chips. Strange that they didn’t remove the Enfield Laundry sign on the front window, though.

Incidentally, this shop sits along Coronation Parade, Enfield, which we’ll look at in the near future…