In 1999, I ventured into town to see Star Wars Episode I. My elaborate plan was to see it at the Pitt Centre cinema, which I’d always noticed tucked away behind the flashier George Street cinema strip. However, when I got into the city I found the cinema complex had been recently closed. My plan, my day had been ruined. Thanks, Greater Union Pitt Centre.

Opened in 1976, the cinema stood nearly derelict from 1999 to 2011, when construction work began on some sort of ANZ-themed skyscraper. It was in this condition that I found the site today:

To the left sits the former Bank of NSW, a future entry on Past/Lives.

From street level, there’s now nothing to suggest that the Pitt Centre or the neighbouring Chinese restaurant and courtyard were ever there. However, the view from above betrays an odd and long-forgotten secret: 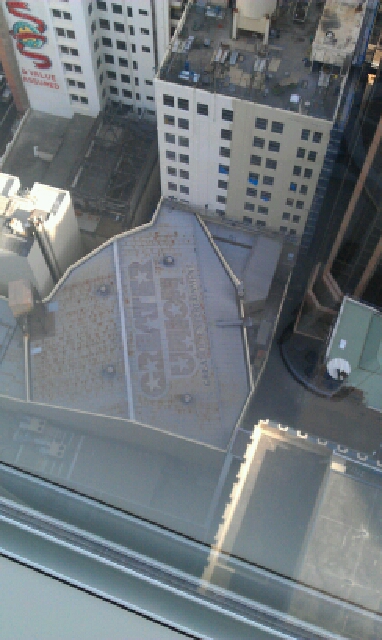 You can’t buy that kind of advertising space.

SHEEPISH UPDATE: it seems as though the above image is actually the rear of the Greater Union-owned State Theatre (see below). This revelation marks the second time the Pitt Centre has ruined my schemes.  Thanks, Ellena!