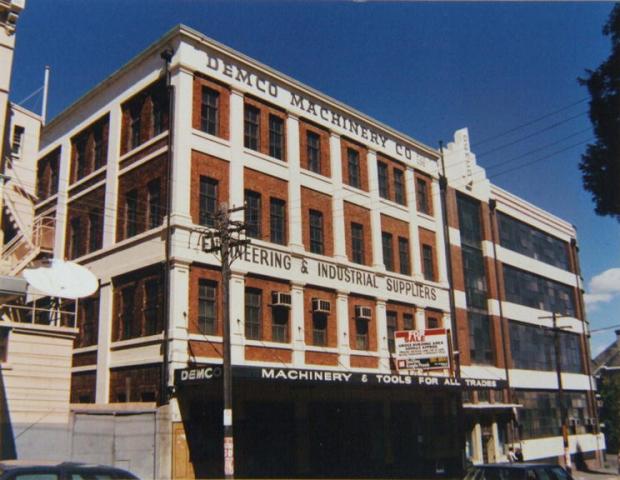 The Demco Machinery site, on Cleveland Street in Surry Hills, is made up of two separate buildings. The one in the foreground here is the oldest, first used as a tobacco factory in 1911, and then a tea company until the 1920s. Once Demco moved in around 1930, they patiently waited for the St Margarets Hospital for Women Dispensary next door, built in 1906, to fall on hard times. They didn’t have to wait long: 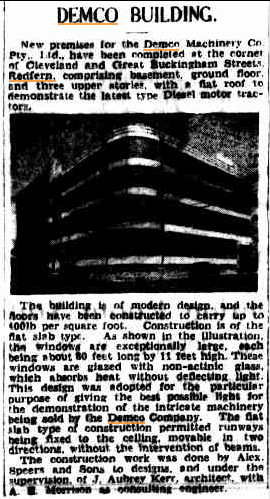 Strangely, although the building’s address is currently 267-271 Cleveland Street, advertisements prior to 1953 give Demco’s address, as well as that of the hospital and the tobacco factory, as 243-247 Cleveland Street. There must have been a renumbering of Cleveland Street around that time, as to avoid confusion, from 1948 Demco started advertising their address as ‘corner of Cleveland and Buckingham Streets’.

Demco packed up its city operations in 1989, moving out to Greenacre as part of the industrial migration to Sydney’s west. Since 2002, the older half has been occupied by Mao & More, a Sinophile’s paradise of kitschy Oriental paraphernalia very at home in the increasingly gentrified area. The showroom half of ‘modern design’ Demco were so proud of currently consists of several businesses, including The Gingerbread Man, a film and web production company located in the basement; and a sportswear manufacturer. The only evidence of Demco’s time here is the art deco Demco sign still sitting atop the building.