Time to try something new: think of this as a game of spot-the-difference writ large across decades. I’ll occasionally throw a few of these up just to spice things up a bit. To kick things off, let’s take a look at the Beverly Hills Hotel as it was back in 1981…

This photo, taken from what is now a car park across the road, shows that the Beverly Hills Hotel was once called the Hotel Bennelong, that there was some kind of Coke-sponsored diner next door to it, and oh, what’s that tall sign on the far left? I can’t quite read it. And if you think the BHH is rough these days, imagine how it must have been back then. There’s a reason those guys are wearing hard hats.

Of greater interest is what’s happening in the foreground: the council is hard at work putting in the stormwater canal that now runs parallel to the East Hills train line all the way from here to Wolli Creek. On the far right, caught in the midst of all this progress is some dude’s house. As he makes his way to and from work, then to and from the pub each day, little does he know that in a matter of years his home will become the local baby health centre…but that’s a story for another day. To the future! 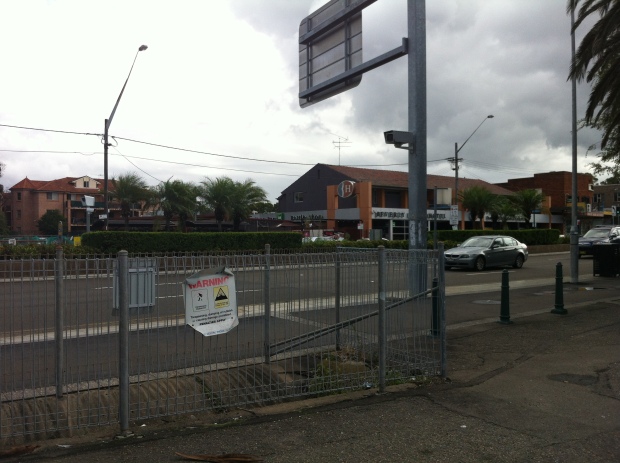 In this context, 2014 sounds much more futuristic than it does as say, the expiry date of your driver’s licence, doesn’t it? The most striking aspect of the futurescape is the abundance of palm trees, installed to help lend Beverly Hills a Californian vibe. Counteracting this vibe is everything else pictured, especially the intrusive presence of the cameras. I know they’re there for our safety, but still – very Orwellian. It’s interesting to note that the hotel and Hepburn Court beside it remain largely the same as they were 33 years ago, and at this point I’d like to repeat that for any readers born in 1981 – 33 years ago.