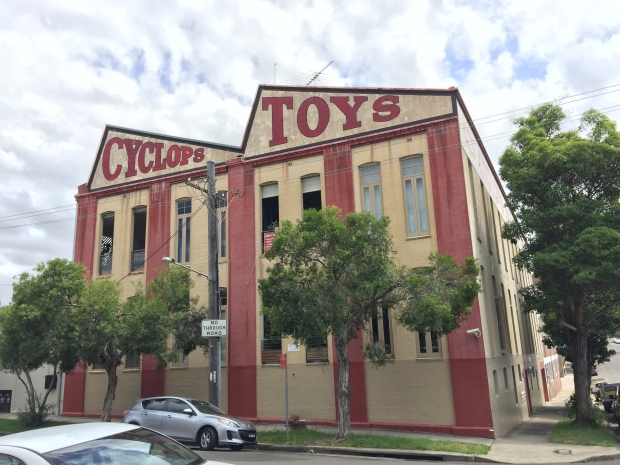 “I live near the Cyclops Toys building” was a direction I heard often when I lived in Leichhardt.

Every inner westee seems to know this place and certainly, if you spend any time in the suburb, you can’t miss it.

The fun, red letters spelling Cyclops Toys speak loud from the top of this old red and beige trike and bike factory. The fact they’re squashed into the sawtooth roof makes them look like they’re in speech bubbles. Are the words being shouted proudly or whispered knowingly? It’s hard to tell.

The Cyclops Toys building sits in a dip on William Street on the corner of Francis Street, so it talks clearly at you as you drive down from Norton Street. It has three storeys, including the lettering, which makes it mammoth compared to Leichhardt’s oft-tiny, one-storey weatherboards and brick semis that my friend’s mother once described as “a collection of posh beach shacks”.

The sawtooth design of the roof suggests this place was actually a factory, not just a storage facility. The sawtooth, with its glazed steeper surfaces facing away from the north, was designed to shield workers and machinery from direct sunlight, while allowing natural light into the deep-plan building. Or perhaps Cyclops just wanted to stop their bikes and trikes getting too hot.

Cyclops have been making bikes and trikes since 1913. And in fact, Leichhardt was where it all began. John Heine Sheet Metal started making flat framed trikes at Hay Street, on the other side of Leichhardt, that year. The Cyclops name was registered two years later.

By 1920 the company was on fire – it started mass producing the Cyclops pedal car, which it claims to be the “first Australian mass produced car” – 30 years before the Holden came along.

Around ten years later it started making the Dinky Trike, soon to be found strewn across children’s backyards, parks and footpaths around Australia throughout the early-mid 20th century.

Those years were huge for Cyclops. Two world wars and the Great Depression meant less toys coming in from Europe and the company positioned itself nicely to fill the gap.

The William Street factory – listed with Cyclops Toys for the first time in 1930, according to History of Sydney – would have been key to Cyclops’ growth, and would likely have employed a considerable number of local workers.

By the 80s Cyclops claim to have made over 50 different types of wheel toys, including pedal cars, scooters and even doll prams. Alas, the original Dinky was not one of then – that design was shelved in 1950.

Today Cyclops still make a wide range of trikes, bikes, scooters and even helmets. You just need to pop along to Target.

As for the William Street factory, it’s now a set of attractive “warehouse conversion” apartments. Agent blurbs on Realestate.com talk up the apartments’ original hardwood floors, exposed beams, picture windows and soaring ceilings. And the market is lapping them up; some three-bedroom apartments have sold for way north $1,500,000.

But despite the building being closed off for private owners, it’s still treasured by locals. The vintage-style letters speaking loud and proud to anyone who comes down the hill. It’s almost as if Cyclops knew their future market; it’s the inner west all over.