It’s on a main road. Hundreds, if not thousands, of cars pass it every day. They pass it. They don’t stop. Would you?

I did, because there was something about this building…something I couldn’t quite put my finger on. 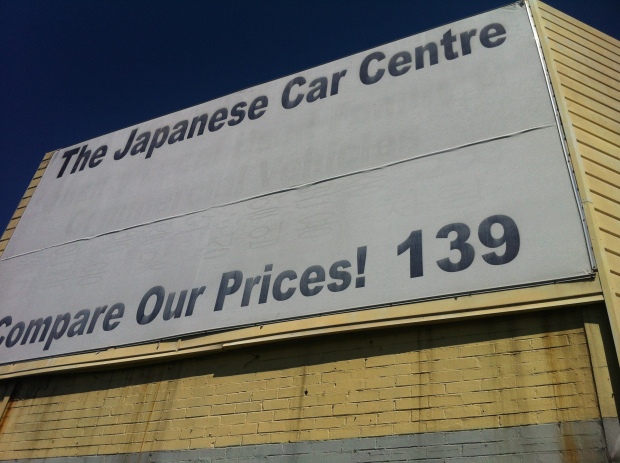 It wears its former tenants like bad tattoos all over its festering body. On the eastern side, the Japanese Car Centre dares car shoppers to compare their prices.

A quick glance across wild grass to the neighbouring site almost has you thinking that was possible, but the cars on the lot were peppered with P plates and those flag boxing gloves, the 21st century fluffy dice. A quick inquiry in the Toyota dealership revealed that the Japanese Car Centre had been abandoned for years, and was now used as Toyota staff parking. As I left the slightly confused receptionist to her absent Facebooking, I thought about the reality of what she’d said: staff parking. Hell of a lot of staff. 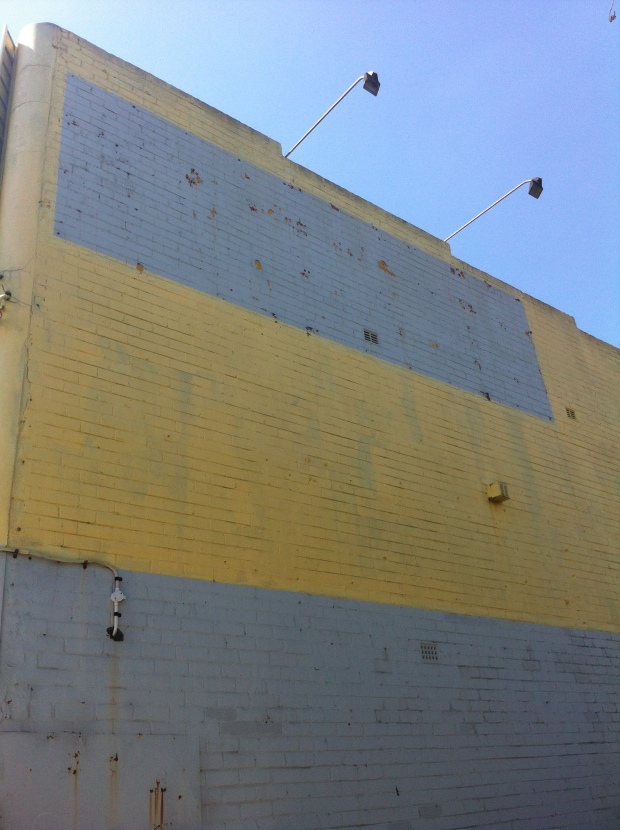 On the western side, trees had worked to cover this once-prominent advertising canvas. The lights were long dead, whatever the sign had said was lost to the ages.

Buildings like this have a way of opening up to you after awhile. In this case, it was the abundance of electronic doodads covering its face like piercings that gave it away. From this former sign… 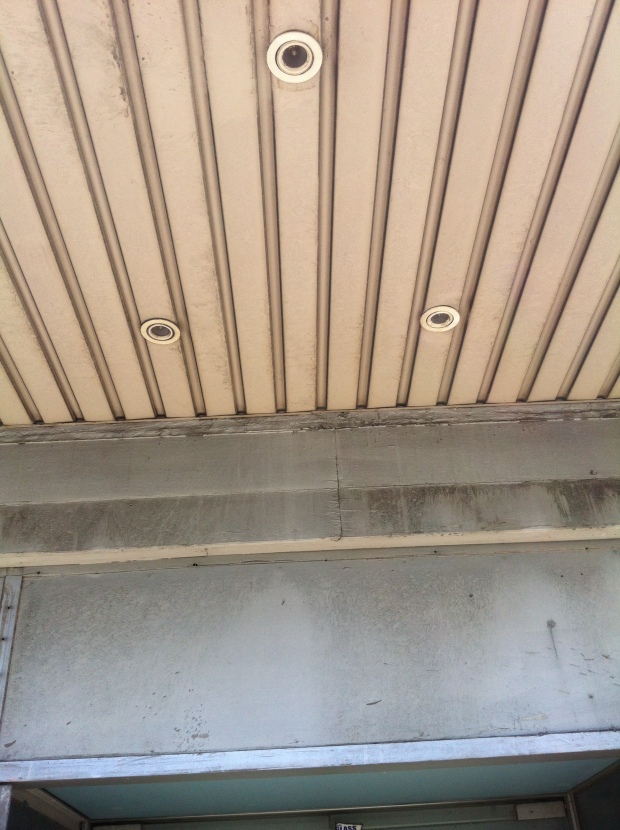 …to the downlights above the doorway… 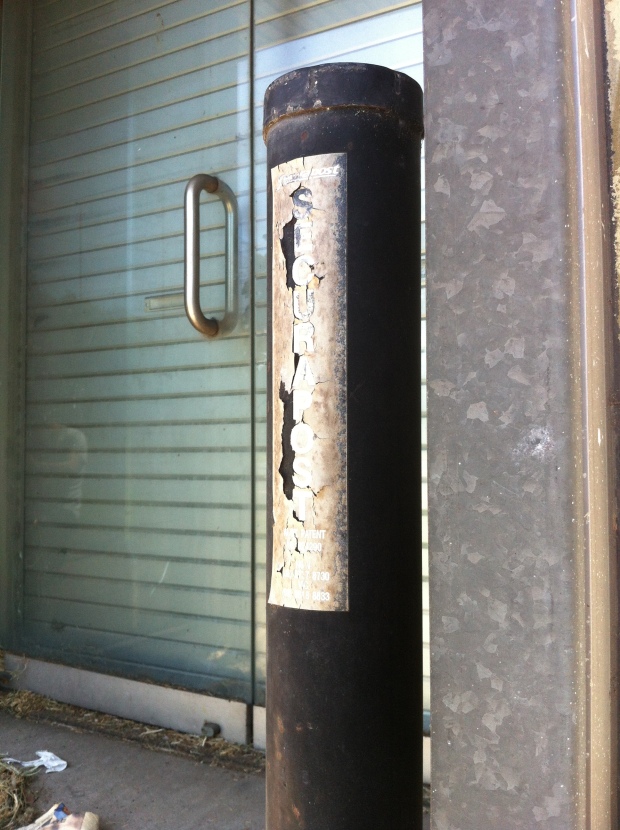 …to the Secur-A-Posts preventing Smash-N-Grabs, gadgets had this place covered. But who had done the covering?

The glass door didn’t reveal many secrets, except for a distinctly retail feel inside… 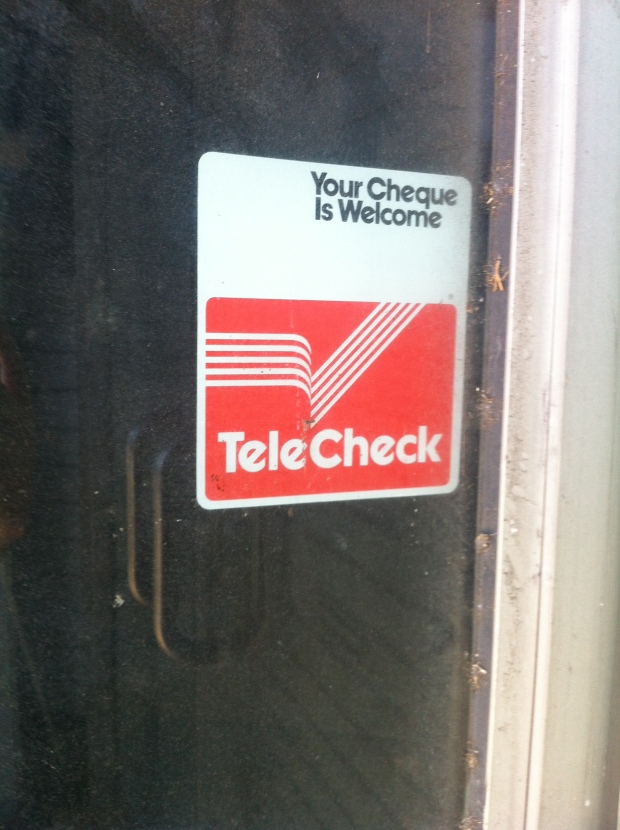 …a notion backed up by their generous acceptance of TeleChecks. Now, the kiddies in the audience might be wondering what the hell a cheque is, and even if I told you you’d probably doze off halfway through. Let’s just say that this TeleCheck company – which I’d certainly never heard of – claims to have been around for 50 years. This must have been an early adopter.

And then it struck me: the colour scheme. Look at the building for a moment. It’s canary yellow. What kind of madman would have it this way?

Yes, the truth is revealed at last. For years, this was a Dick Smith Electronics outlet, back when Dick Smith Electronics emphasised the electronics side of the business rather than the dicksmithing. When Dick sold out to Woolworths in 1980, they (for a time) stuck with his main street store approach. This would have been one of the last, dying out sometime in the mid 1990s.

From the look of things, a furniture factory outlet took charge of the prominent location and eye-grabbing paint job before (in a cruel parody of the corporate 80s) it was absorbed by the Japanese Car Centre. And now that’s been gone for years, so who’s here now?

The Japanese Car Centre traded up to become Five Dock-smiths (You’re fired. -Ed) while this building has been left to rot, and that’s where the story should end. But you’re my readers, and I love you, so I want you to know I tried to go the extra mile. I know that you love photos of docking bays around the back of places like this…I know that. But when I went around to the abused little alleyway that ran behind the site, I, for the second time in Past/Lives’ history, interrupted a drug deal. So I’m very sorry, docking bay lovers – I just couldn’t get that shot.

Epilogue: Don’t cry for Dick Smith. His NSW warehouse is situated just a bit further up the Hume, where Homebush Bay Drive intersects, with a small retail outlet tacked on for good measure. He ain’t hurtin’. The Japanese Car Centre’s doing just fine too, joining a thriving indie car dealership strip on Parramatta Road, and abandoning the big boys who dominate this section of Chullora. In fact, the only loser in this story is me, because I had to spend so much time across from Fairfax’ offensive billboard of “journalist” and apparent buccaneer Peter FitzSimons while I took these photos. What’s that doo-rag all about, Peter?