Once upon a time, this shop would have served the hamburger and hot chip needs of as many residents of Eastwood as could be bothered walking to it. These days, it’s easier to just go to the Macquarie Centre.

Situated along Balaclava Road (bal-A-KLAAAAR-VA, or buh-LACK-luvuh for our SA readers), it’s clear that this was one of those corner shops of yore, the kind that would require a visit every few days to stock up on such olden days essentials like sugar, lard and chicken feed. But as times changed, so did the shop’s offerings.

Above the roller-door of the former loading dock is a telltale sign boasting of hamburgers and hot chips, cunningly repurposed as…some kind of reverse sign. You can bet that when it opened, hamburgers and hot chips were probably just gleams in Fred Hamburger and Glenn ‘Hot’ Chipps’ eyes, but to stay alive in the corner shop game, you’ve gotta diversify. 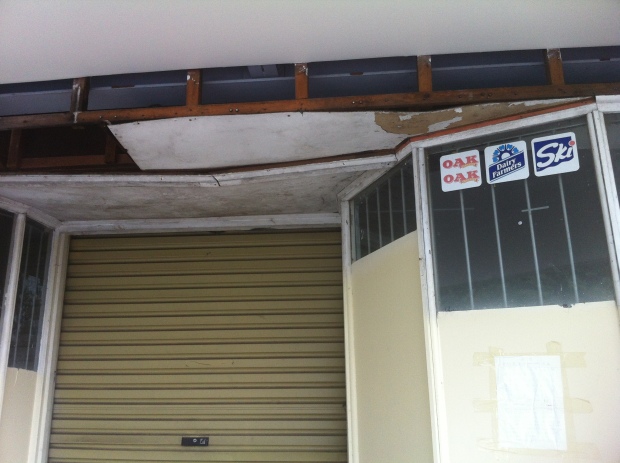 By what looks like the late 90s or, at a stretch, early 2000s, the place was even supplementing its bread-and-butter milk supply with Ski yoghurt. With a Woolworths within 5km in every direction by this point, it was a desperate time calling for desperate measures. But even the combined deliciousness of Fruits of the Forest weren’t enough to reverse the fortunes of this store.

In the end, the big boys won, and this dangerous threat to their dominance and manhood was eliminated. Do you think Coles and Woolworths shared a beer over this death? Do you think they even noticed? Undeniably aware of the building’s deep-fried past, the current owners have decided to take it in a different direction – residential. Won’t Coles and Woolworths be pleased?