Hewn into the shores of the Parramatta River by teams of felons and convict, this scrubby tract of Great Northern Road is a relic revisited by an overgrown walking path. Nestled between the restored 19th century cottage of Banjo Patterson (itself becoming the churning engine room of a 1950’s industrial site – but that’s another story) and the haunted grounds of the Gladesville Asylum (another long story) this rocky outcrop has since been as forgotten as the aboriginal campsite it was built upon. 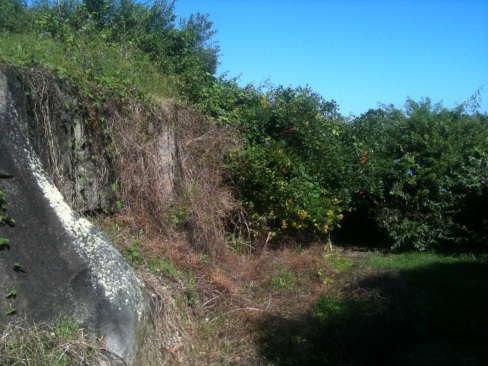 The path down to the derelict Bedlam Wharf 2012, Parramatta River, Gladesville NSW. 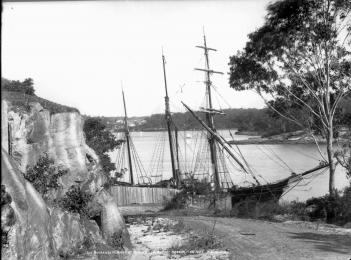 A ship berthed at the Bedlam Point Wharf around 1890. Image by Sydney photographer Henry King.

The first mention of a Wharf at Bedlam Point was around 1834. The ferry was operated by convict labour and could carry one horse and cart with a few passengers. It was at Bedlam that the Parramatta River is at its narrowest – which lead surveyors chart the Great North Road through this point. 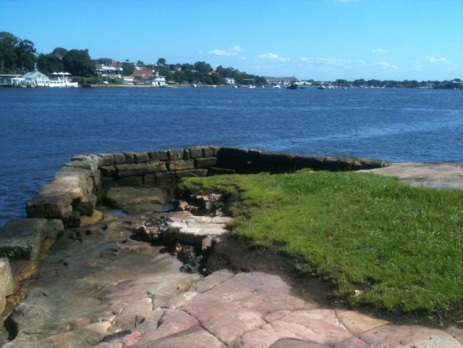 The abandoned wharf at Bedlam Point.

Engineering at the time dictated a chain be fastened at either side to wind the punt across by hand. Today’s Rivercat is known to be – generally – more dependable. Unless you want it to stop here. Which it won’t.

“The ferryman is not to be depended upon, for no later than Thursday last he lay dead drunk on the South Shore of the River,
within less than his own length of the water’s edge, in consequence of which several person lost their package to Sydney, and two of them, a lady and gentleman, were, we believe, compelled to remain all night at the “Red House” public house of Bedlam Point.”